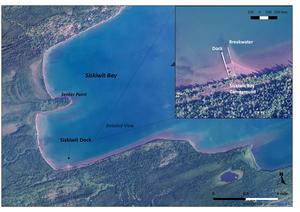 In compliance with the National Environmental Policy Act (NEPA) of 1969, as amended, the National Park Service (NPS) prepared an Environmental Assessment (EA) for the Siskiwit Dock Project at Isle Royale National Park. The purpose of the proposed action is to "allow for the reestablishment of the natural current and distribution of sediment along the shoreline" in the area of the Siskiwit dock in a manner that will not conflict with the purpose, significance, and fundamental resources and values of Isle Royale National Park as described in the 2015 Foundation Document and 1998 General Management Plan (GMP). A secondary goal was to support recreational access and operational access in the area. The purpose of the EA was to document the potential environmental impacts associated with the alternatives and determine whether to prepare an environmental impact statement (EIS) or a finding of no significant impact (FONSI).

THE SELECTED ACTION
NPS Management Policy § 4.8.1.1 states that where "structures have altered the nature or rate of natural shoreline processes, the Service will... investigate alternatives for mitigating the effects of such activities or structures and for restoring natural conditions." (2006). As noted in Isle Royale's GMP: "The aerial photography record of this [Siskiwit Dock] area, which dates back to 1930, indicates that these docks have interrupted the natural current along the shoreline and caused a considerable buildup of sand and silt. A small artificial peninsula is being formed...." Further analysis, as outlined in the EA, supported this conclusion. Thus, NPS initially proposed completely removing the existing dock and breakwater.

Along with removal of the structures, the EA also analyzed a no action alternative and replacement of Siskiwit dock and breakwater with a new dock in approximately the same location, where the structure allows for more natural movement of sediment along the shore. Public comments suggested an alternative to create a gap along the shoreline, removing approximately 50 feet of dock, breakwater and all accumulated material starting at the historical shoreline. Access to the new dock would be provided by the addition of a "bridge" over the gap (Figure A). This alternative, referred to as the "gap" alternative, is the Selected Action.

PUBLIC INVOLVEMENT
The EA was made available for public review and comment from April 20, 2016 through May 22, 2016 on the NPS Planning, Environment and Public Comment (PEPC) website. Announcement of the review opportunity was made through news releases, social media, park website and email. Correspondence was received from 19 individuals or organizations, and was documented on the NPS PEPC website.

CONCLUSION
Based on a review of the facts and analysis contained in this EA and supporting documentation, the selected alternative will not have a significant impact, either by itself or in consideration of cumulative impacts. Accordingly, the requirements of the NEPA, regulations promulgated by the CEQ, the US Department of the Interior, and provisions for NPS Director's Order 12 and Handbook have been fulfilled, NPS finds that the selected alternative does not constitute a major federal action significantly affecting the quality of the human environment. Therefore, in accordance with the NEPA of 1969 and regulations of the CEO (40 CFR 1508.9), an EIS will not be prepared for this project.