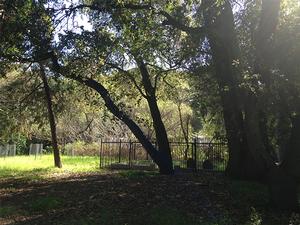 The Muir/Strentzel gravesite is located approximately one-mile south of the Muir house. The 1.27-acre parcel is surrounded by post WWII-era single-family residences to the north, west and south, and bounded by Alhambra Creek to the southeast. The parcel contains a historic pear orchard and a small family burial area including the gravesite of John Muir.

According to its founding legislation, John Muir National Historic Site was established as a public memorial honoring the memory of John Muir for his contributions to the nation in land conservation and for his crusading efforts in advancing the cause of the national parks. The purpose of this plan is to further this legislative charge by providing public access to the Muir/Strentzel Gravesite, John Muir's final resting place and an important part of the National Historic Site which to this day has remained largely inaccessible to the public. In addition to enhancing the realization of the legislated mission of John Muir National Historic Site, the purpose of this plan is to fulfill the broader NPS mission related to the management of natural and cultural resources under its care, and to plan for all of the aforementioned in a manner that respects surrounding landowners who live in close proximity to the Gravesite.