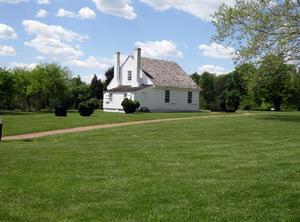 Installation of Security Lighting at the Stonewall Jackson Shrine

The Fredericksburg and Spotsylvania County Battlefields Memorial National Military Park took possession of the Stonewall Jackson Shrine in 1937. The surviving structure on the property was the office for Fairfield Plantation. In this building, Confederate General Thomas "Stonewall" Jackson died on May 10, 1863. Following the completion of a historic structure report, the Jackson Shrine underwent a full restoration in the 1964. A historic furnishing plan brought numerous artifacts and antiques into the building, including the bed Jackson died on, the blanket that covered him during his finals days, and a clock that belonged to the plantation owners. The Shrine reopened in 1966 and has since been staffed by park interpreters on a seasonal basis.

The Stonewall Jackson Shrine is a rather isolated part of the park. The property is located in Caroline County and approximately ten miles from any other site in the park. While the Shrine is staffed and open on a seasonal basis, the property is open from sunrise to sunset every day. A park residence sits about 100 yards from the historic building, but occupancy is rather infrequent. Due to its isolation and lack of consistent on-site staff presence, the Shrine has been targeted by vandals breaking into the building. This has occurred three times in the past six years. The building does have a functional and up-to-date alarm and fire suppression system, but break-ins continue to occur and the park desires to install additional security measures. These measures involve the installation of three motion-detection floodlights