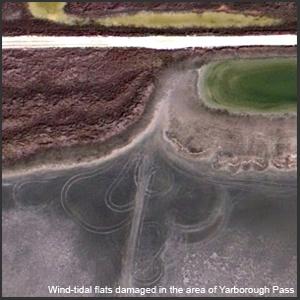 Padre Island National Seashore is proposing to reclaim areas within the park's wind-tidal flats that have been damaged by vehicles. The reclamation project would restore the surface hydrology of the tidal flats as well as help to restore the park's natural viewshed. Reclamation of the tidal flats would provide the opportunity for research and long-term monitoring for the determination of more successful methods for future wetlands habitat restorative efforts.

Wind-tidal flats are a very limited and specialized environment existing within a few centimeters of sea-level. As a result, wind-driven seawater moving across the flats is vulnerable to disruption from any change in topography. Vehicles driven on the tidal flats leave deep ruts and ridges in the soft sediment, which alter the natural surface flow of seawater. Benthic invertebrates, such as polychaetes, crustaceans, and insect larvae, are vulnerable to the change in water level, and are often starved of seawaters. Blue-green algal mats, also dependent on the ebbing and flowing of Laguna Madre waters across the flats, provide some of the most productive shorebird feeding grounds. As a result of impacts to the algal flats and invertebrates, shorebirds, such as dunlin, least sandpiper, western sandpiper, and the federally-listed piping plover, have lost potential foraging habitat.

The specific objective for this project is the discovery of protocols for restoring hydrology and reclaiming the tidal flats with minimal secondary impacts. Once the methodology has been analyzed and determined that no additional impacts would occur, implementation of the project would be carried forward.

In compliance with the National Environmental Policy Act (NEPA), an Environmental Assessment (EA) will be prepared for this project. This process will provide the decision-making framework that (1) analyzes a reasonable range of alternatives to meet project objectives, and (2) evaluates issues and impacts to park resources and values.

The National Park Service encourages public participation throughout the NEPA process, during which the public has two opportunities to formally comment on the project; once during initial project scoping and again following release of the EA. We are currently in the scoping phase of this project, and invite you to submit your comments by February 24, 2012. Comments should be submitted through this site, mailed, or hand-delivered to the park. We look forward to hearing from you.