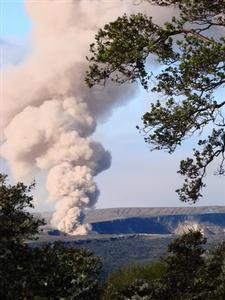 We would like to share our progress on this project over the past several years and encourage your renewed involvement. The newsletter found under 'Document List' contains a summary of the preliminary alternatives for the Hawai'i Volcanoes National Park ATMP for your review and comment. A description of expected tasks during the upcoming months is also provided, as well as information on additional opportunities for you to provide input.

In 2004, the Federal Aviation Administration (FAA) and National Park Service (NPS) asked for your comments on an Air Tour Management Plan (ATMP) Environmental Assessment (EA) related to managing commercial air tour overflights at Hawai'i Volcanoes National Park. In 2005, the project was upgraded to an Environmental Impact Statement (EIS). Since 2007, a planning team composed of staff from FAA, NPS, and the Volpe National Transportation Systems Center has been working on preliminary alternatives for air tour operations over the park.

Under the National Parks Air Tour Management Act (NPATMA) of 2000, an ATMP needs to be established "for any national park or tribal land for which such a plan is not in effect whenever a person applies for authority to conduct commercial air tour operation over the park." The objective of an ATMP as defined by NPATMA "shall be to develop acceptable and effective measures to mitigate or prevent the significant adverse impacts, if any, of commercial air tour operations upon the natural and cultural resources, visitor experiences, and tribal lands." According to NPATMA, Commercial air tour operations are defined as any flight conducted for compensation or hire in a powered aircraft, where a purpose of the flight is sightseeing over a national park, within ½-mile outside the boundary of any national park, or over tribal lands during which the aircraft flies below 5,000 feet above ground level (AGL).