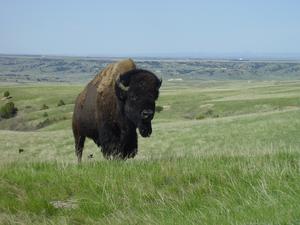 Badlands National Monument in South Dakota was recognized as a significant area when the United States Congress authorized its establishment in 1939. The monument encompassed approximately 110,000 acres of the South Dakota Badlands. The monument was expanded by 133,000 acres in 1968, and it was redesignated as Badlands National Park in 1978. The park's outstanding scenic values, its importance to the science of paleontology, and its natural resources were, and continue to be, its signature features.

The 1968 expansion created the South Unit of the park, which comprises tribal lands that are part of the Pine Ridge Reservation. Unless otherwise stated, in this document the term "park" refers only to the North Unit of Badlands National Park.

The purpose of this plan was to explore options to expand the current geographic bison range to other areas within the North Unit of Badlands National Park. Expanding the geographic bison range in the North Unit would enable the National Park Service to protect the genetic integrity and health of the conservation bison herd in the North Unit, support the health of the mixed-grass prairie ecosystem, and provide appropriate visitor opportunities to view the herd and understand its ecological and cultural importance.