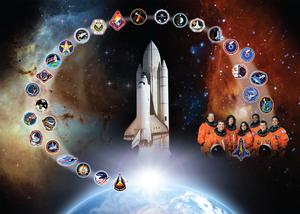 Thank you for your interest in the Space Shuttle Columbia Memorial Special Resource Study.

Public Law 110-229, section 324 authorized the Secretary of Interior through the National Park Service to conduct a special resource study to assess the suitability and feasibility of establishing a national memorial to the Space Shuttle Columbia as a unit of the National Park System. The legislation specifically identified four study sites; each located in Hemphill, Lufkin, Nacogdoches, and San Augustine, Texas. In addition, the legislation includes a provision that the Secretary may recommend additional sites in Texas relating to the Space Shuttle Columbia for establishment as memorials.

The study analyzed five sites to determine if they met the criteria for new national parklands. The findings reveal that even though the loss of space shuttle Columbia is considered a nationally significant event of exceptional importance to the nation and a number of study sites in East Texas have a direct association with this tragedy, none meet the suitability criteria for establishing a new unit of the national park system. The national perspective of this event is richly represented by a vast array of other federal, state, and locally managed museums and memorials commemorating Columbia and her crew. Most importantly, the Astronauts Memorial, located at the John F. Kennedy Space Center, was previously recognized by Congress as the national memorial to astronauts who die in the line of duty. As a result of the negative suitability finding, the study team did not evaluate the criteria for feasibility or the need for NPS management in detail. There was no basis for further consideration of new unit potential and the study process was concluded.

The study was transmitted to Congress on April 2, 2015.