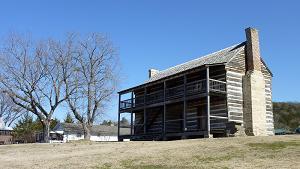 On behalf of the Wolf House Special Resources Study team, I would like to thank you for your interest in the study process. We have concluded our study of the Wolf House in Norfork, Arkansas and it has been presented as a report to Congress.

The Wolf House was constructed about 1829 as the first county courthouse in what was then Izard County in the Territory of Arkansas. Built by Jacob Wolf, an early European American settler and territorial legislator, the building reverted to his ownership and served has his family home when the county court location was moved in 1835. The two-story, "dogtrot" plan, log building is a large yet characteristic example of early county courthouses. Often constructed of logs, these early courthouses were frequently the first public services available to settlers on the leading edge of European American settlement, and marked the transition between rough country and established communities.

The study examines the history of the Wolf House in the context of early courthouses and the log dogtrot building type. Scholarly research, which was peer reviewed by independent experts and considered by the National Historic Landmarks Program in Washington, concluded that while the Wolf House is a rare example of a vital building type in the history of the American frontier, it does not meet the high integrity standard to qualify as a National Historic Landmark. Therefore, the Wolf House does not meet the criteria for a new unit of the National Park System, and the study proposes no federal action. Opportunities for preservation and interpretation of the Wolf House are identified in the study.

A digital version of the study can be found in PDF form at the link in the left hand column.

Thank you again for your interest. It is the hope of the study team that this report will be a useful tool in understanding the historic context of the Wolf House and planning for its future preservation and interpretation.