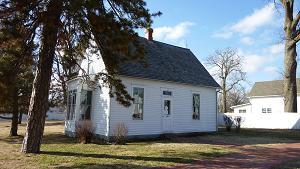 On behalf of the Harry S Truman Birthplace Special Resources Study team, I would like to thank you for your interest in the study. Last spring, we created and distributed a newsletter to introduce you to the study process and asked for your comments to help guide our work. We have now completed the study. Please click on "Document List" on the right sidebar to access the final study.

The National Park Service was directed by Congress to study the Harry S Truman Birthplace in Lamar, Missouri for possible inclusion as a unit in the national park system, as an addition to the Harry S Truman National Historic Site based in Independence, and study other possible options. Now completed, the study has been presented as a report to Congress.

For a site to be recommended as a potential new park unit, it must meet the criteria for national significance, be a suitable and feasible addition to the park system, and NPS must be found to be the best option for management. The study first considered the national significance of the site in making a determination. The Harry S Truman Birthplace is important as the site of his birth, and retains good integrity as a historic site. However, scholarly research and peer-reviewed analysis determined that the Harry S Truman Birthplace does not meet the Congressionally-established criteria for national significance for new units of the National Park System (which is the same as National Historic Landmark criteria).

Each national park contributes something to the story of our nation. The suitability analysis considers whether the story of a site is being adequately told within the National Park Service or comparably by a state or local government, nonprofit group, or private entity. The study concluded that the life and accomplishments of Harry S Truman are already well-preserved and interpreted within the National Park System. An additional site devoted to President Truman would not meet the criterion for suitability. Additionally, the study concluded that the Harry S Truman Birthplace was already well-preserved and interpreted by the State of Missouri.

The Harry S Truman Birthplace was also considered as addition to the boundary of the Harry S Truman National Historic Site (NHS) in Grandview and Independence, Missouri. For an area to be appropriate for addition to an existing park, it must (1) protect significant resources or enhance opportunities for public enjoyment, (2) address operational and management issues of the existing park site, or (3) protect critical park resources. The added lands must also be feasible to administer, and there must be no other adequate alternatives for management and resource protection. The study found that the Harry S Truman Birthplace does not meet the criteria for addition to the boundary of the existing NHS. The birthplace is already adequately protected and able to be enjoyed by visitors through management by the State of Missouri, and is also 120 miles distant from the NHS. Because the criteria for adding the Truman birthplace to the National Park System are not met, no Federal action is proposed.

Following the public meeting and comment period, we carefully considered all comments. A summary of comments made can be found in Appendix E of the study. (The study can be downloaded by clicking on "Document List" on the right sidebar.)

If you would like a print copy sent to you, please contact our office to request one. Thank you again for your interest in this Special Resource Study. We appreciate your involvement.