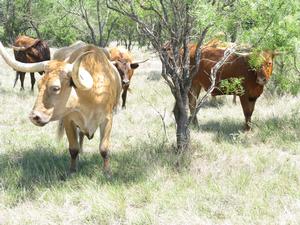 The study was completed and transmitted to Congress May 17, 2019, Please see final paragraph below for link to transmitted study document.

The proposed Chisholm and Great Western National Historic Trail commemorates the routes followed by upwards of ten million cattle as they traveled northbound from southern Texas to Kansas and adjacent destinations between 1867 and the 1880s.

In recognition of the perceived national importance of these two routes, and in response to public advocacy for the inclusion of these routes in the National Trails System, Congress passed legislation that was signed by President Obama on March 30, 2009 (Sec. 5303 of P.L. 111-11).

Public meetings for scoping purposes were held in June 2010. A planning newsletter and a scoping report are available. The reviewed statement of national significance has been posted as well. The study and environmental assessment were released for public review in January 2015 and generated over 800 responses. Comments received during the study process were overwhelmingly supportive of national trail designation. Accordingly, the NPS selected Alternative B, Designate Two National Historic Trails as One Administrative Unit, for implementation, which is documented in the Finding of No Significant Impact (FONSI) signed September 13, 2016. This study was transmitted to Congress in 2019 for their consideration. The study document and transmittal letters are available at http://parkplanning.nps.gov/FinalChisholmGreatWesternNHTStudy2019

Thank you for your interest in this planning project.