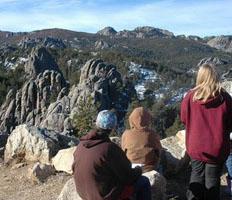 Mount Rushmore National Memorial has assembled a National Park Service Rapid Resource Assessment Team (RRAT) to create an action plan to address the Mountain Pine Beetle (MPB) epidemic that is causing ponderosa pine mortality throughout the Black Hills. Working with area agencies, the memorial is developing an aggressive plan to slow and hopefully mitigate the movement of the pine beetle into the memorial.

On February 23, the action team and memorial staff met with local and regional specialists from Custer State Park, South Dakota Department of Agriculture - Wildland Fire Suppression Division, South Dakota State University, United States Geological Survey, United States Forest Service, and entomology and forest health professionals to begin drafting the action plan. The group discussed the current condition of MPB in the central Black Hills, identified issues and concerns surrounding the beetle problem, and discussed treatment options and resources available to address the outbreak. To date, the park has identified pockets of trees affected by the mountain pine beetle, and have taken action to remove some of them from the park for decontamination.

Because the mountain pine beetle epidemic has the potential to affect some of the memorial's fundamental resources, including the forested setting of the sculpture, old growth ponderosa pine, and scenic vistas, the park's management team is considering options to mitigate effects while returning the forest to a more natural, historic and sustainable landscape.

Integrating scientific research information, current condition reports, and experience from area specialists, the memorial's Rapid Resource Assessment Team has compiled an action plan that combats the mountain pine beetle on several fronts. Included for consideration in the DRAFT plan are steps to prevent infestation of high value trees within visitor use areas that help maintain the visual landscape around the sculpture, measures to seek out and attack mountain pine beetles that have already entered the park, and proactive thinning and buffering of the memorial's forest against the encroaching mountain pine beetle population. These actions are in concert with projects being carried out by Custer State Park and the Black Hills National Forest to mitigate the mountain pine beetle infestation.

While mountain pine beetles are native to the Black Hills ecosystem, forests stressed by drought, warm winters, and other environmental factors have contributed to a higher than normal beetle population leading to the local epidemic. This is causing an imbalance in the forest ecosystem and a dangerous fire risk for the Black Hills.

The public is invited to review the DRAFT plan and submit comments. The plan, still in development, should be posted by March 1st. The website is available for public comment until March 15, 2010. Copies of the plan will also be available for viewing at the Mount Rushmore Information Center, located at the memorial, until March 15.

The memorial is working within the scope of National Park Service Management Policies and regulations to develop the plan, and will continue planning, consultation with public, partners, and neighbor agencies throughout the project to maintain a cooperative, interagency, multi-partner effort to address the current mountain pine beetle epidemic.