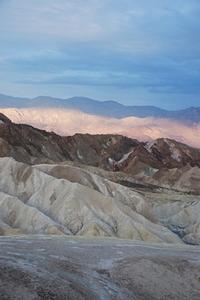 Seven air tour operators currently provide commercial air tours over and within ½ mile of Death Valley. Since January of 2003, these 7 operators have had authority to conduct a maximum combined total of 67 air tours per year, though in recent years, operations have been below this level. The primary attractions for air tour visitors are Badwater, Scotty's Castle, Ubehebe Crater, the Racetrack, and the rugged expanse and geologic features of the Park.

An ATMP is being developed to provide measures to mitigate or prevent significant adverse impacts, if any, of commercial air tour operations at Death Valley, including impacts on natural and cultural resources, visitor experiences, and tribal lands within or around the park. It should be noted that the ATMP has no authorization over other non-air-tour operations such as military and general aviation operations. The Death Valley ATMP will be prepared using an Aviation Rulemaking Committee (ARC) process. The purpose of using the ARC process is to provide early advice, information, and recommendations from interested stakeholders to the FAA and NPS, regarding environmental and other issues to consider in the development of an ATMP. The Death Valley ARC is composed of various representatives including air tour operators, federal, local and regional agencies, environmental organizations, local businesses, and the Timbisha Shoshone tribe. It is chaired by the Park Superintendent, Sarah Craighead.

In June 2009, the ARC held a two-day kickoff meeting at Death Valley; minutes may be found at: http://www.faa.gov/about/office_org/headquarters_offices/arc/programs/air_tour_management_plan/park_specific_plans/Death_Valley.cfm

The purpose of the kickoff meeting was for stakeholders to have the opportunity to provide advice, information, and recommendations to the FAA and NPS regarding environmental and other issues to consider in the development of an ATMP. Materials presented at the meeting included information on: park resources; the park acoustical environment; military operations over Death Valley and the surrounding areas; current and historical air tour operations; and, a map of current air tour flight paths. After a generalized map of current air tour flight paths was presented, ARC members made suggestions regarding options for an air tour flight track that would consolidate flight paths and modify elevations and flight locations. Refer to the Public Scoping Document (look under "Document List") to see how these suggestions are incorporated into an air tour route.