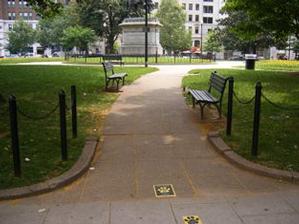 McPherson Square is located two blocks northeast of the White House between K, I, and 15th Streets, N.W. Washington D.C. National Mall and Memorial Parks proposes to rehabilitate McPherson Square (U.S. Reservation 11). This project will repair or replace in kind degraded or non-functional features; improve accessibility; and improve the sustainability of the park for the future. The proposed project entails replacement in kind of all the major landscape features of McPherson Square (walkways, post and chain fencing, trash receptacles, light poles, benches and drinking fountains). Some modernization and upgrades to meet contemporary infrastructure needs will be implemented. The large Chinese elm intruding into the walkway on the south center panel will be removed and two red oaks (native species existing in the park) will be planted in the outer panels. The historic iron fencing surrounding the equestrian statue of General McPherson will be repaired and rehabilitated; however preservation work on the statue is not in the scope of this project.

McPherson Square underwent extensive redesign in the 1920's. The plan was implemented in 1930-1931 and included the addition of narrow curving walks (west and east) in the final design. There has been no major rehabilitation effort at the park since the 1930s. Although routine maintenance is consistent, the overall appearance reflects decades of use. This park is one of two nearly identical parks located symmetrically from the White House. The twin park, Farragut, received rehabilitation in 2003 - 2004. Both squares are part of the original plan for the City of Washington and are listed on the National Register of Historic Places (McPherson LCS ID 46126). Cultural Landscape Inventories were completed for Farragut Square in 2003 and for McPherson Square in 2004 (revised in 2005). This project will address many of the condition issues outlined in the cultural landscape inventory. Upon completion, the cultural landscape will be improved from fair to good condition.