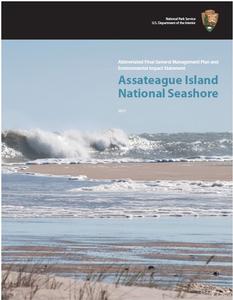 The Abbreviated Final GMP/EIS includes an analysis of comments received on the Draft GMP/EIS with NPS responses, errata sheets detailing editorial corrections to the Draft GMP/EIS, and copies of agency and substantive public comments. This final plan will guide long-term decisions about the management of Assateague Island National Seashore.

Over the past few years, the public has participated in the planning process through public meetings, formal and informal consultation, newsletters, and materials posted on the internet. In early 2016, the Draft GMP/EIS was available for public review for 90 days. Approximately 27 interested individuals, agencies, and organizations received either a digital copy or paper copy of the Draft GMP/EIS. An additional 400 individuals, agencies, and organizations received newsletters announcing availability of the Draft GMP/EIS and providing information on how to obtain copies (hard copy or digital) or to view the document on-line.

The NPS Planning, Environment, and Public Comment (PEPC) website
(http://parkplanning.nps.gov/ASIS) offered interested parties an opportunity to review and comment on the Draft GMP/EIS via the internet. On March 29, 30, and 31, 2016, the NPS hosted open houses in Salisbury (MD), Berlin (MD), and Chincoteague (VA), respectively, where the public had opportunities to review the Draft GMP/EIS and provide comments.

The NPS received 268 pieces of correspondence on the draft plan. This commentary was thoughtful, helpful, and sincere. I would like to thank the people who commented for sharing their insights. I also would like to express our appreciation to the many people―partners, advisors, and members of the public―who provided input throughout the planning process. Your input has confirmed our belief that alternative 3 is the preferred alternative and that the management actions it proposes will best guide long-term stewardship of Assateague Island National Seashore.

The final document is in an abbreviated form because comments received during the public review period required only minor responses and editorial changes to the Draft GMP/EIS. For clarification purposes, some minor changes have been made to the description of alternatives and the impact analysis findings presented in the Draft GMP/EIS. Alternative 3 remains the NPS preferred alternative. The abbreviated format has allowed us to produce a simple brief document and to avoid costly reprinting of the entire 650-page Draft GMP/EIS document.

Thank you for your continued interest in our management planning process and Assateague Island National Seashore.