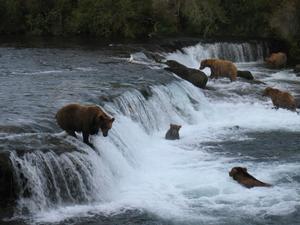 An environmental assessment (EA) was developed in which the National Park Service proposed to replace utilities and to relocate employee housing in the Brooks River Developed Area of Katmai National Park and Preserve. The project is needed to accomplish phased implementation of the 1996 Development Concept Plan for the Brooks River Area.
If funding is approved, the project site clearing could begin as early as mid-July 2010, with construction in 2011 and 2012.
The comment period for the EA was from December 15, 2009 to January 15, 2010.