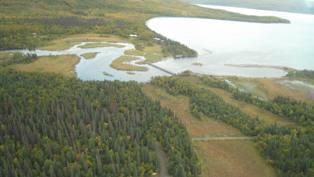 The National Park Service (NPS) has prepared an Environmental Impact Statement (EIS) on a proposed Brooks River bridge and boardwalk, and associated access changes, to the Brooks Camp Area within Katmai National Park and Preserve. In addition to the No Action alternative, the EIS evaluates a reasonable range of alternatives to provide improved access to the Brooks Camp Area, to better protect natural and cultural resources, and to facilitate dependable travel between the north and south sides of Brooks River. Dependable access across Brooks River will advance the phased relocation of facilities and operations from the north side to the south side of the river, as set forth in the record of decision following the 1996 DCP/EIS.

The EIS evaluates alternatives for a bridge and boardwalk that would span the lower Brooks River. The existing floating bridge would be removed. A new bridge would provide for the existing floatplane access to the Brooks Camp Area to continue, with planes beaching on the shore of Naknek Lake on the north side of Brooks River. A new barge landing and access road would be constructed to the south of its current location. This proposal would amend the 1996 Brooks River Area Development Concept Plan (DCP) and EIS, which called for construction of a new floatplane dock, breakwater, one-mile access road on the south side of Brooks River, and required a shuttle system.