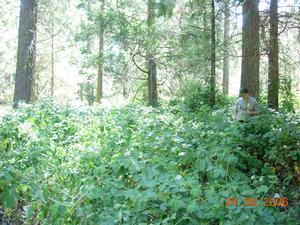 After careful consideration, the park has selected Alternative 2, Add Four Herbicides and Address Limitations in 2008 IPMP. The Selected Alternative in the 2010 IPMP Update EA is consistent with all applicable federal laws, NPS policies, and park plans. Public involvement provided valuable input into this planning process.The following modifications and clarifications have been made which provide more detail (see Mitigation Measures Table and Errata), and address comments and concerns raised by the public, agencies, and associated American Indian tribes and groups during the comment period on the EA (see Public Comment and Response Report).

Under Alternative 2, invasive plant management planning is based upon the principles of IPM, with control methods including manual, mechanical, cultural, herbicides, and very limited biological controls (See Actions Common to All). Compared to the No Action Alternative, Alternative 2 builds upon the 2008 IPMP by increasing treatment methods and tools available for use in order to meet the program's stated purpose and need:
• Add 4 new herbicides (rimsulfuron, triclopyr, chlorsulfuron, and imazapyr) which are appropriate for use in wildlands and enable treatment of the broadest spectrum of invasive species likely to enter the park
• Alternative 2 will address limitations in the 2008 IPMP including:
- Removing individual patch size and density limits for herbicide use, which limited ability to treat infestations while they are still small
-Clarifying and refining treatments and methods appropriate for sensitive areas such as traditional gathering areas, near water, and in Wilderness.

Clarifications and modifications made to Alternative 2 (Selected Action):

The following clarifications and modifications have been made to the Selected Action: Alternative 2, in response to comments and suggestions submitted by the public, staff, agencies, and American Indian tribes and groups.
• Management in traditional gathering areas will consider all treatment options. The appropriate treatment will be selected following consultation and information sharing, and in cooperation with park-associated American Indian tribes and groups.
• Treatment in wetlands and riparian areas will occur during dry season and/or low water levels, Aquatic approved herbicides may be applied up to the waterline, but not in water.
• Water quality monitoring will occur 1st season; before and after treatment of the two largest riparian blackberry patches in Yosemite Valley.
• Data and results of monitoring are reported annually, and can be viewed online at: http://www.nps.gov/yose/naturescience/invasive-plant-management.htm
• For addition (or replacement) of new herbicides, a NEPA process would be initiated to prepare a Supplemental EA, with public scoping, specification of purpose and need, proposed herbicide, an analysis of impacts, and a 30-day public review period.
• For emergencies, (e.g., discovery of a rapidly spreading new infestation for which approved methods were ineffective), the Superintendent could approve (under a Categorical Exclusion according to NEPA) a limited effort to treat known populations of a species of concern with a new herbicide (EPA approved, field-tested, recommended by independent technical and agency experts) if necessary. Simultaneously, a Supplemental EA would be initiated, as described above.
• Protocol for selecting the appropriate method has been clarified with a revised Figure II-2 (page II-23).