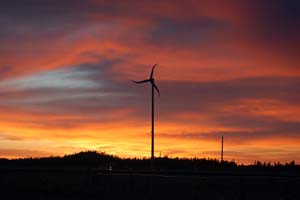 Gates of the Arctic National Park & Preserve, a unit of the National Park Service (NPS) proposes to install a wind power generator at the Anaktuvuk Pass Ranger Station. The Ranger Station is located in the City of Anaktuvuk Pass in the central Brooks Range, at the continental divide (elev. 2,200') between the headwaters of the Anaktuvuk and John Rivers. The proposed project, the installation of an alternative energy system at the Anaktuvuk Pass administrative site will support the implementation of NPS sustainable energy policies and decrease park operational costs for electrical power. Because Anaktuvuk Pass is accessible solely via aircraft, the cost of importing supplies, including diesel fuel, is very high. The NPS desires to switch the power source for the Ranger Station to one which meets the following criteria:
• Reduces dependence on local power sources using diesel fuel and the associated barrel disposal problems;
• Is environmentally sound and supports the NPS Green Energy policy;
• Produces electric power in a cost-effective manner; and
• Allows the NPS to assume a leadership role through the installation of sustainable energy sources.