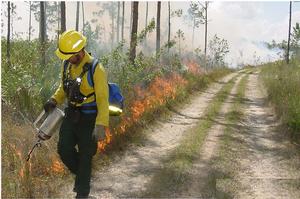 I am pleased to announce the completion of a new Fire Management Plan (FMP) for Everglades National Park. The FMP has been updated in response to changes in fire management policy and guidance which have evolved since the last FMP was prepared in 1995.

The National Park Service (NPS) completed an Environmental Assessment (EA) for the new FMP in October 2014. The FMP EA described two alternatives and their consequences relative to implementation of a comprehensive fire program including wildland fire response, fire protection, and fuels management. Both alternatives included a continuation of active management of fire and fuels within Everglades National Park. The main difference between the alternatives is the manner in which prescribed fire treatments are planned and where they would occur. The preferred alternative - the new FMP - calls for prescribed fires to be planned and implemented on a multi-year rotation of fuels treatments. Prescribed fires would take place in wilderness and non-wilderness areas and would be prioritized annually based on public safety and ecological goals.

The NPS encouraged public participation throughout the National Environmental Policy Act process during which the public had two opportunities to formally comment on the project. The first was completed during initial project scoping, and the second during the public comment period for the EA in October-November, 2014. After the public review period for the EA, NPS staff carefully considered each comment received. Several small changes were made to the EA, and these are recorded in an Errata Sheet and are a permanent part of the decision record.

NPS Southeast Regional Director Stan Austin signed a Finding of No Significant Impact (FONSI) for the new FMP on October 13, 2015. The FONSI records the decision to implement the new FMP and explains why implementation will not result in significant environmental impacts. It also includes the park's responses to comments received and the Errata Sheet documenting the changes to the EA.

Copies of the new Fire Management Plan, FONSI and Environmental Assessment may accessed and downloaded by clicking on the "Document List" link at the left side of this page.

Thank you for your interest in Everglades National Park.