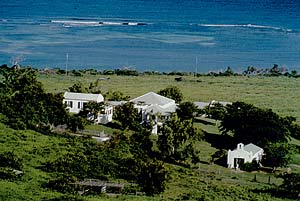 The Castle Nugent Farms Special Resource Study was authorized under Public Law 109-317 on October 11, 2006. This legislation directs the Secretary of the Interior to determine 1) if the resources present at Castle Nugent Farms are nationally significant, 2) if the site would be a suitable and feasible addition to the National Park System, 3) whether direct NPS management or alternative protection by other public agencies or the private sector is appropriate for the site, and 4) what management alternative would be most effective and efficient in protecting the resources and allowing for public enjoyment of the site.

The Castle Nugent Farms study area encompasses an area that contains the remnants of one-time smaller cotton, sugar, indigo and cattle plantations. Located on the arid southeastern shore, about three miles southeast of Christiansted, the study area consists of approximately 2,900 acres of hilly and rolling terrain that contains mostly a mixture of dry forest, native vegetation, and rangeland and five miles of coastline that extends out from the shoreline to the three-mile territorial limit. The lands contained within the area are referred to mostly by the names of the original Danish plantations (also referred to as estates) that were established there.

The estate known as Castle Nugent is the core 1,400 acres of the entire 2,900-acre study area. The estates formerly known as Laprey Valley, The Springs, and Munster were included within Castle Nugent holdings in the late eighteenth and nineteenth centuries. The estates Fareham, Petronella, and Longford were added when Castle Nugent was purchased by Howard and Mary Wall in 1951.

The overall study area is comprised of mostly open land that enjoys impressive views to the sea and to distant parts of the island. The land slopes from the 750-foot ridgeline down to the sea, fronting a coastline of cobble beaches and small crescent bays. One of the largest and healthiest fringing coral reef systems in the Virgin Islands extends from the shoreline to only a few hundred feet offshore within U.S. Virgin Islands territorial waters. The study area also contains a variety of natural communities and habitats that represent an exceptional diversity of ecological components that have been little disturbed. Of particular note is an area known as Great Pond Bay, a fringe, reef-protected lagoon that is a mecca for several species of birds and contains the most substantial black mangrove stands left in the Virgin Islands

Although in different states of repair, the estates at Castle Nugent contain an array of historic and prehistoric cultural resources, including artifacts from pre-Columbian settlements, and extant resources from several of the Danish-era plantations (eighteenth through the early twentieth centuries). The study area also has an important long-standing association with cattle grazing. Today, large areas are still used to raise and breed Senepol cattle. The Castle Nugent Farms cattle ranch has been in continuous operation for more than 50 years, and is one of the oldest ranches in the West Indies.