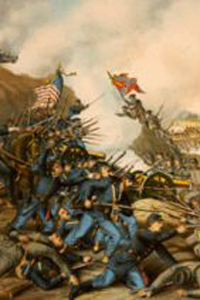 PURPOSE OF STUDY
New areas are typically added to the National Park System by an Act of Congress. However, before Congress decides to create a new park or add land to an existing park, it needs to know whether the area's resources meet established criteria for designation. The National Park Service (NPS) is often tasked by Congress to evaluate potential new areas for compliance with these criteria and document its findings in a Special Resource Study (SRS).

On December 1, 2005 Congress passed the Franklin National Battlefield Study Act (Public Law 109-120) directing the Secretary of the Interior to conduct a SRS for certain sites in Tennessee relating to the Civil War Battle of Franklin including the cities of Brentwood, Franklin, Triune, Thompson Station, and Spring Hill, Tennessee.

HISTORICAL CONTEXT OF STUDY AREA
During the summer of 1864, Confederate President Jefferson Davis' concern about the overly cautious military strategy of General J.E. Johnston led him to replace Johnston with General John Bell Hood as Commander of the Army of Tennessee. Although Hood was unable to prevent General Sherman from taking Atlanta in September 1864, he did employ a more aggressive style of defense by attacking Sherman's army three times.

Despite being forced to abandon Atlanta, the Army of Tennessee remained a considerably large and potent force. Hoping to divert Union forces from a deeper penetration of the southern heartland, Hood reformed his ranks and marched north towards Nashville on the last great Confederate offensive of the war.

Hood's progress towards Nashville was slowed by sporadic contact with Union skirmishers fighting a delaying action. Pursuing Federal troops commanded by General John Schofield, Hood arrived in Franklin at mid-day on November 30 to find Schofield's men well entrenched and supported by artillery from nearby Fort Granger. Hood's generals recommended caution but he disregarded their counsel and ordered an attack upon the enemy lines as quickly as possible.

The ground between the opposing forces was quite open and the Confederates formed for the assault in full view of the Union line. Charging through a steady barrage of artillery fire, they pressed home the attack around 4:00 pm. Darkness settled over the battlefield hardly more than an hour after the Confederate attack began and the fighting continued until well after dark.

Confederate units smashed headlong and futilely into the Union line again and again. After 17 distinct assaults and 5 hours of intense fighting, Hood called his soldiers back to regroup for a morning assault the next day. Schofield, however, had no desire for a second engagement and gave the order to retreat shortly after the last shot was fired. By 2 am, the Union army was on its way to Nashville.

At morning light, 2,500 soldiers lay dead or dying in Franklin with more than 1,800 Confederates among them. In all, Hood's army suffered an estimated 7,000 casualties including 65 field grade officers. The Confederate army's senior military leadership was decimated by the loss of 6 generals killed, 8 wounded and one captured.