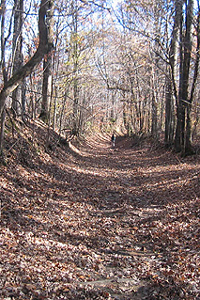 Dear Friends of the Trail of Tears National Historic Trail

Welcome to the Feasibility Study Revision and Update Page for this national historic trail (NHT). As you may know, Congress authorized the amendment and update of the 1986 Trail of Tears Final Trail Study (feasibility study), in December 2006. Public meetings were held in the affected states of Georgia, Alabama, North Carolina, Tennessee, Kentucky, Missouri, Arkansas, and Oklahoma in July 2007. A draft feasibility study was opened to public review Sept. 19-Oct. 19, 2007, has been revised based on comments received. A Finding of No Significant Impact, which allows the study to go forward, was signed on November 27, 2007. The feasibility study was transmitted to the National Park Service's Washington Administrative Service Organization (WASO) for further review.

The study was transmitted to the US Congress, and legislation was introduced on February 8, 2008.

This legislation was subsequently included in the Omnibus Public Land Management Act of 2009 (HR 146), which President Obama signed into law on March 30, 2009.


Learn more about the historic trail by visiting www.nps.gov/trte.

Working together we can protect the resources, develop partner relationships, and tell the stories of the Trail of Tears.