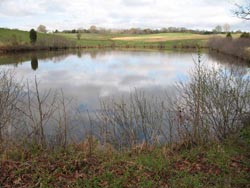 In 1998, the National Park Service acquired the 36.16 acre Ashton Tract in the Jackson Flank Attack area of the Chancellorsville Battlefield. The property contains two farm ponds, created by the construction of two dams in the 1950's.

Both ponds are located a considerable distance from park or public roads and thus the sites are difficult to monitor. As the ponds cannot be adequately monitored, they pose a safety risk. Additionally, the dams of both ponds are not adequately maintained and are deteriorating, posing their own safety concern.

Since the dams and ponds were created in the mid-20th century, and were thus not part of the original battlefield landscape, and they prove an increasing safety risk to park visitors and neighbors, Fredericksburg & Spotsylvania National Military Park proposes to drain the ponds and notch the dams.

Under the guidelines of Section 106 of the National Historic Preservation Act, FRSP is soliticing public comments on this project. Written comments, either through this website or via postal letter, will be accepted only during the 30 day public review period.