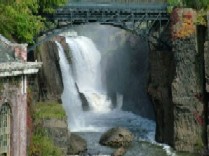 The Great Falls Historic District is the site of the first planned industrial development in the United States. Alexander Hamilton selected the site in 1792, largely because of the 70 foot tall Great Falls of the Passaic, which would provide a source of hydro power for industry. The Society for Useful Manufactures (S.U.M.) hired Pierre Charles L' Enfant, to design a system of raceways, including a dam across the Passaic River, though the design implemented was not L'Enfant's. The raceway system, and the historic architecture associated with silk mills, rail locomotives, and armaments all contributed to the Secretary of Interior's designation of the Great Falls National Historic Landmark District, announced by President Ford in 1976.

Public comments on the report can be submitted electronically until January 30, 2007.