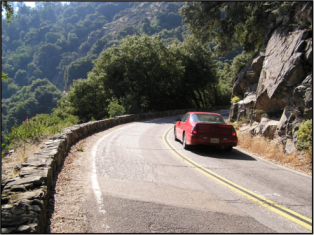 The National Park Service (NPS) has prepared a Finding of No Significant Impact (FONSI) for the environmental assessment/assessment of effects (EA/AoE) titled, Rehabilitate Generals Highway from Amphitheatre to Deer Ridge and Wolverton Road to Little Baldy Turnout for Sequoia and Kings Canyon National Parks. The EA/AoE was made available for public review and comment in March 2008. Pacific West Regional Director Jon Jarvis signed the FONSI on July 2, 2008.

The two alternatives that were analyzed in the EA were: Alternative A, a no-action alternative and Alternative B (preferred alternative), an action alternative which involves improving road geometry along two sections of the Generals Highway, 1.5 miles between Amphitheatre Point and Deer Ridge and 8.5 miles between Wolverton Road and Little Baldy Pullout. This alternative would also involve: replacing deteriorating pavement surface, redesigning parking and pullout configurations, addressing design flaws which have caused drainage problems and restoring a meadow which has been altered by the presence of the highway. These alternatives were developed based on project goals and objectives; internal and external scoping; and policy guidance. Two other alternatives were considered during the EA process but dismissed as they did not meet the purpose and need for the project or would cause major impacts to visitor experience and park operations in implementation.

After a thorough review of project goals and the impacts of the alternatives on cultural, natural, and social resources, consideration of public comment, and further consultation with the California State Historic Preservation Office (CA SHPO), the preferred alternative (Alternative B) has been selected for implementation. Actions proposed for implementation under the selected alternative include: (1) constructing retaining walls, stabilizing shoulders, constructing cantilevered bridges and blasting rock slopes in order to expand road width to a consistent 10-feet per lane; (2) recycling and overlaying pavement in the existing road bed between Wolverton and Little Baldy section; (3) replacing culverts, curbs and gaurdrails; (4) redesigning pullouts and removing and revegetating social pullouts; (5) installing a bridge across Halstead Meadow which would allow the natural sheet flow of water through the meadow; (6) restoring the meadow by filling the deeply incised channels that have developed from piping water under the road through two culverts.

Topics of concern identified during scoping and evaluated in the EA included: special status species (wildlife and plants); wetlands and floodplains; park operations; visitor experience; cultural landscapes; and historic structures. Mitigation measures described in the EA will be implemented to minimize adverse impacts. The NPS has also signed an updated programmatic agreement with CA SHPO and the United States Forest Service (USFS) which contains mitigation measures and a monitoring plan specific to the treatment of multiple historic structures which exist as part of and adjacent to the highway. The USFS participated in the agreement as a portion of the highway runs through USFS land.

Thank you for your interest in the process leading toward the final decision on the EA/AoE to Rehabilitate Generals Highway from Amphitheatre to Deer Ridge and Wolverton Road to Little Baldy Pullout for Sequoia and Kings Canyon National Parks. The FONSI can be downloaded here or a hard copy can be obtained by calling 559-565-3102 or emailing seki_planning@nps.gov.