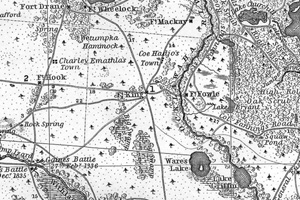 New areas are typically added to the National Park System by an Act of Congress. However, before Congress decides to create a new park it needs to know whether the area's resources meet established criteria for designation.

The NPS is often tasked by Congress to evaluate potential new areas for compliance with these criteria and document its findings in a Special Resource Study (SRS). Congress directed the NPS to prepare a SRS for Fort King, a Second Seminole War site in Ocala, Florida in 2000 (Public Law 106-113 Appendix C §326 ).

A SRS serves as one of many reference sources for members of Congress, the NPS, and other persons interested in the potential designation of an area as a new unit of the National Park System. Readers should be aware that the recommendations or analysis contained in this SRS do not guarantee the future funding, support, or any subsequent action by Congress, the Department of the Interior, or the NPS.

Because a SRS is not a decision making document, it does not identify a preferred NPS course of action. However, NPS Policy (§4.4 NPS DO-12) requires that each SRS include an Environmental Impact Statement and identify an environmentally preferred alternative (§2.7D NPS DO-12).

In addition, the 1998 Omnibus Parks Management Act (Public Law 105-391 §303) mandates that each SRS identify the alternative or combination of alternatives which would, in the professional judgment of the Director of the National Park Service, be "most effective and efficient" in protecting significant resources and providing for public enjoyment.

Three alternative management approaches and a No Action alternative are analyzed in the document.

Alternative A: Alternative A is the No Action alternative and describes a future condition which might reasonably result from the continuation of current management practices. Under Alternative A, the Fort King site would remain predominantly undeveloped, public access would be restricted, and the site's archeological resources would be protected and preserved in an undisturbed condition.

Alternative B: Alternative B highlights the site's archeological resources by preserving and interpreting them in-situ. The alternative takes a conservative approach to site development that favors a simple and low cost implementation strategy. Alternative B is identified as the environmentally preferred and the most effective and efficient alternative.

Alternative C: Alternative C highlights a combination of archeological and historic themes. Existing site infrastructure is used as a base to quickly and efficiently provide pubic access and interpretive services. The alternative favors a development strategy that builds upon a modest initial investment that can be expanded over time as additional funding and resources are secured.

Potential environmental impacts that would result from implementation of the above alternatives are addressed in the document.