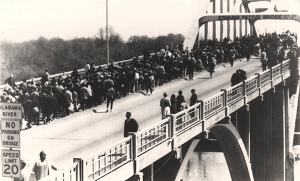 The National Park Service is pleased to announce the initiation of a special resource study of the Selma to Montgomery National Historic Trail in Alabama, associated with the 1965 Voting Rights March in Alabama. Led by local, grassroots efforts with support from national organizations such as the Student Nonviolent Coordinating Committee (SNCC) and the Southern Christian Leadership Conference (SCLC), Black and white demonstrators brought attention to the disenfranchisement of African Americans and a short time later, the passing of the Voting Rights Act. The Selma to Montgomery National Historic Trail stands as a testament to the struggle to preserve the right to vote as a fundamental cornerstone of American democracy.

The US Department of the Interior Budget for Fiscal Year 2022, identified the need for a study of the 54-mile march route currently designated as a National Historic Trail to evaluate:

2. the potential designation of the Trail as a unit of the national park system instead of, or in addition to, remaining a designated part of the National Trails System.

Although "Boundary Study" is in the title of this project in the Department of the Interior Budget for Fiscal Year 2022, National Historic Trails are not automatically designated units of the national park system, and boundary studies cannot be completed on non-national park system units. For this reason, the special resource study criteria will be used to further evaluate the eligibility of the National Historic Trail and associated resources for potential designation as a new national park unit. All four criteria must have positive findings for an area to be considered eligible for inclusion in the national park system. More information about the study process is available under the 'Plan Process' tab on the left menu bar. The National Park Service will use this website to display public information throughout the course of this study. Public meeting information will be posted here, along with project updates. Thank you for your interest in the Selma to Montgomery National Historic Trail Special Resource Study.

What is a special resource study?

The purpose of this special resource study is to analyze information about the 1965 Selma to Montgomery March in central Alabama through historical research and public input, and then to report these findings to Congress via a special resource study. The special resource study will evaluate the potential for inclusion of the properties associated with the march based upon whether it meets established criteria for national significance, suitability, feasibility, and the need for NPS management. Please use the "Links" tab on the left to find additional information on the criteria used to evaluate the site.

Historical Background of the Selma to Montgomery National Historic Trail

The 54-mile National Historic Trail follows the historic march beginning at Brown Chapel AME Church in Selma and crossing the Edmund Pettus Bridge. As they crossed the bridge, the nonviolent marchers, including the late Congressman John Lewis, were stopped and beaten by law enforcement officers in what came to be known as "Bloody Sunday" on March 7th, 1965. Having seen the violence on national evening news, other demonstrators from around the country joined the marchers in Selma. A second march, known as "Turnaround Tuesday" and "The Ministers' March" occurred on March 9, with hundreds of ministers arriving in Selma to march in support of the right to vote. This march, however, stopped where the violence had occurred two days earlier on "Bloody Sunday," and after kneeling to pray, marchers returned to Brown Chapel AME. Supporting demonstrations took place elsewhere in Selma, in Montgomery, and across the country. After negotiations in Montgomery with the leadership of the Southern Christian Leadership Conference (SCLC), the Student Nonviolent Coordinating Committee (SNCC), elected officials, federal arbitrators, and a favorable court ruling, the demonstrations for voting rights culminated in a five-day march that began in Selma on March 21st, 1965, this time with state and federal law enforcement protection for the marchers.

The marchers traveled along U.S. Highway 80 in Dallas County, continued through Lowndes County and Montgomery County, and ended in front of the Alabama State Capitol in Montgomery. The Southern Christian Leadership Conference (SCLC) and the Student Nonviolent Coordinating Committee (SNCC) organized the logistics for the march, which lasted five days and four nights, and coordinated with landowners, students, faith-based organizations and other groups to provide food, water, sanitation, and other services for the marchers. The marchers camped at three farms which were owned by African Americans along U.S. Highway 80: the David Hall Farm (Campsite 1) on March 21, the Rosie Steele Farm (Campsite 2) on March 22, and the Robert Gardner Farm (Campsite 3) on March 23. On March 24, the final night of the march, the marchers camped on the athletic field of the City of St. Jude (Campsite 4), and were entertained by celebrities during the Stars for Freedom rally. During the night and through the next day, the number of marchers grew to approximately 25,000 as they gathered in Montgomery on March 25th, with many notable speakers addressing the crowd at a concluding rally in front of the capitol building. As a result of the march and demonstrations, the Voting Rights Act was signed on August 6th, 1965.

Currently, the NPS is in the initial data gathering phase of the project. Interested parties, stakeholders, scholars, and the general public will be able to inform the study by helping the NPS study team understand the significance of a site(s), what makes a site(s) unique from other sites currently protected by the national park system, how designation would help protect the cultural resources and provide for visitor enjoyment of those resources, and why direct management by the NPS would be better than conservation by other federal, state, local, and private entities. Formal opportunities to provide this input will be advertised and updates will be posted on this website.

We welcome your participation throughout this process. This website will be updated with information to keep you informed, as well as request feedback as needed. Public meeting information will be posted here. We hope you will continue to be engaged as we move forward with this special resource study. Thank you for your interest!