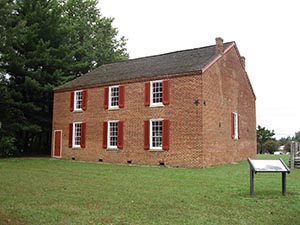 Fredericksburg & Spotsylvania NMP proposes to address water infiltration issues and inadequate attic ventilation at Old Salem Church. Staff from the National Park Service's Historic Preservation Training Center recently repaired and replaced interior plaster that was compromised due to water infiltration through the brick walls. The park proposes to mitigate this issue by adding gutters and downspouts to the structure. In addition, the park proposes to add a wooden gable end vent on the western façade of the building to facilitate ventilation in the attic.

Baptists constructed Old Salem Church in 1844. The structure housed civilian refugees during the Battle of Fredericksburg in December 1862 and witnessed combat during the Chancellorsville Campaign in May 1863. Both sides utilized the church as a field hospital. The church was given to the National Park Service in 1961.

Historic images from the early 20th century indicate that gutters and downspouts have been used on the church in the past. Other historic photos show a semi-circular gable vent in the structure's western façade. Following the completion of the 1968 Historic Structure Report, the gutters, downspouts, and gable vent were subsequently removed. The park proposes to reinstall 6" half-round gutters and 4" round downspouts. Downspouts will be located on the northwest and southwest corners of the building. A semi-circular wooden gable end vent will also be reinstalled in the church's western façade so that excess heat can escape from the building's attic.