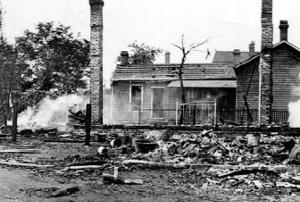 The National Park is pleased to announce the initiation of a special resource study of the site near Madison Street and the 10th Street Rail Corridor in Springfield, Illinois, associated with the 1908 Springfield Race Riot, in which African Americans were targeted and victimized by mass racial violence. The study was directed by Congress through the Springfield Race Riot Study Act of 2020 (Public Law NO: 116-139) to study the site under Congressionally mandated criteria to further evaluate the eligibility of the site for potential designation as a new national park unit. All criteria must have positive findings in order for an area to be considered eligible for inclusion in the national park system. More information about the study process is available under the 'Plan Process' tab on the left menu bar.

The National Park Service will use this website to display public information throughout the course of this study. Public meeting information will be posted here, along with project updates. Thank you for your interest in the 1908 Springfield Race Riot Special Resource Study.

What is a special resource study?

The purpose of this special resource study is to gather information about the 1908 Springfield Race Riot in Springfield, Illinois through historical research and public input, and then to report these findings to Congress. The special resource study will evaluate the potential for inclusion of areas in the national park system based upon whether it meets established criteria for significance, suitability, feasibility, and the need for NPS management. Please use the "Links" tab on the left to find additional information on the criteria used to evaluate the site.

A reconnaissance survey was prepared in 2019 to provide a preliminary evaluation of the property as a potential new unit of the national park system. The survey analyzed the suitability, feasibility, and need for NPS to manage the site.

The study area examined in this reconnaissance survey contains the structural remains of five homes that were burned during the 1908 Springfield Race Riot within an urban section approximately five blocks north of the Lincoln Home National Historic Site and two blocks east of the Abraham Lincoln Presidential Library. St. John's Hospital recently constructed a new health clinic adjacent to the study area that features an exhibit and healing garden, both of which are dedicated to the victims of the 1908 Springfield Race Riot and to those who provided care.

The 1908 Springfield Race Riot took place over the course of a weekend during which a large White mob targeted Black homes and businesses looting, burning, assaulting, and killing. Most of the destruction took place Friday, August 14, 1908, in the Levee and Badlands neighborhoods, where a majority of city's African American residents lived. Rioting in the Badlands commenced at the corner of 9th and Madison Streets, on the same block as the study area that is the subject of this reconnaissance survey. Since the study area was one of the first places targeted by rioters in the Badlands, the area experienced a significant amount of devastation.

The study area consists of an archeological site that preserves the remains of homes burned during the 1908 Springfield Race Riot, and other sites around Springfield that played an important role in the riot and its aftermath.

Based on the findings in the reconnaissance survey, it was determined that further analysis through a Congressionally authorized special resource study was warranted. The Springfield Race Riot Study Act of 2020 (Public Law NO: 116-139) directed the Secretary of the Interior to conduct a special resource study of the site to evaluate its national significance and determine the suitability and feasibility of designating it as a unit of the national park system.

Currently, the NPS is in the initial data gathering phase of the project. Interested parties, stakeholders, scholars, and the general public will be able to inform the study by helping the NPS study team understand the significance of the site, what makes the site unique from other sites currently protected by the national park system, how designation would help protect the cultural resources and provide for visitor enjoyment of those resources, and why direct management by the NPS would be better than conservation by other federal, state, local, and private entities. Civic engagement was conducted in spring 2022 where the National Park Service held a public meeting and received public comments during the public comment period.

We welcome your participation throughout this process. This website will be updated with information to keep you informed, as well as request feedback as needed. Project updates will be posted here. We hope you will continue to be engaged as we move forward with this special resource study. Thank you for your interest!