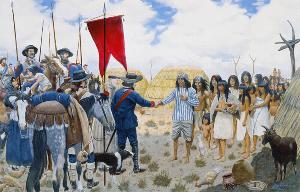 The National Park Service is starting the process of preparing a Foundation Document for planning and administration for the Juan Bautista de Anza National Historic Trail. The public is invited to join in this effort.

The National Park Service invites you to play a role in charting the trail's future by sharing your thoughts on what is most important about the Juan Bautista de Anza National Historic Trail, and to help identify its most pressing threats and its greatest opportunities. Trail staff will take your thoughts and feedback into consideration as they prepare the Foundation Document.

You may submit your feedback here from July 16, 2021 to August 16, 2021 by responding to five questions about the trail's significance, threats, and opportunities.

The Juan Bautista de Anza National Historic Trail is the route traveled by Anza during the years 1775 - 1776. Starting in Sinaloa and Sonora, New Spain (which is now in Mexico), Anza led over 240 settlers to San Francisco to establish a mission and presidio. The families reflected the diverse castes of Spanish society—a mix of Native American, African, and European heritage. The historic trail connects Mexico to San Francisco, and the 18th century to the 21st. On June 27, 1776, the expedition families arrived at what is now San Francisco. Anza forged alliances with several tribes along the route but ultimately, Spanish colonization advanced a devastating blow to the tribal world as it existed. Today, the tribal communities whose lands Anza traveled through—Quechan, Ohlone, O'odham, Tongva, and many more—continue to thrive and pass on their traditions. The descendants of these colonist Californio families also commemorate their heritage along the Anza Trail.

The National Park Service administers the Juan Bautista de Anza National Historic Trail in partnership with other federal, state, and local agencies; non-profit organizations; private landowners; and others. The National Park Service's role includes providing leadership for the trail and setting best practice standards for all partners involved with administration and on-the-ground management of the trail and trail resources.