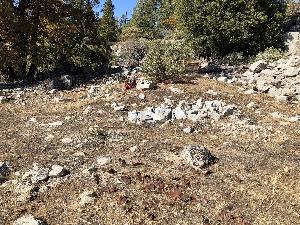 The Mather Former Waste Disposal Area (FWDA) Site (the Site) is located in Yosemite National Park (the Park). The Site is being investigated under the Comprehensive Environmental Response, Compensation, and Liability Act (CERCLA) for potential cleanup of hazardous substances in the environment. Congress enacted CERCLA, also known as Superfund, in 1980 to address releases and threatened releases of hazardous substances into the environment. The Site is located in the northwestern portion of the Park, approximately 200 feet south of Hetch Hetchy Road, 1.25 road miles northeast of the Hetch Hetchy Entrance to the Park.

The Site was originally used as a quarry which supplied granite blocks for construction projects along the Hetch Hetchy Road. The quarry was subsequently used as a waste disposal area. Debris such as porcelain, metal, glass, rusted cans, and batteries are present on the ground surface at the Site, and evidence of burned and buried debris is also observed at the surface. An NPS archeological report published in 2003 described a detailed investigation of the nature of the refuse present at the Site. This investigation indicated that the refuse fragments present at the Site were dominated by food and beverage containers and other types of domestic refuse. Age determination of these materials indicated that the Site was likely used for waste disposal between approximately 1941 and 1970.

Dumping and burning of refuse in the environment can result in contamination of surrounding soil with hazardous substances. The Site was identified as a potential hazardous material site in a RCRA Facility Assessment conducted by the California Department of Toxic Substances Control (DTSC) in June 1999. As the lead agency, NPS proceeded with investigation of the Site pursuant to CERCLA.

Results of soil sampling conducted during these investigations determined the presence of several contaminants above human health risk-based screening levels in Site soils. These included metals such as lead and cadmium, and polycyclic aromatic hydrocarbons, which are often associated with petroleum contamination. Elevated concentrations of dioxins and furans, contaminants which may be associated with burning of refuse, were found in a sample of ash collected during these investigations.

The NPS has prepared a Draft Final Environmental Evaluation/Cost Analysis (EE/CA) for the Site. This EE/CA uses sampling results and findings from previous investigations as a basis to describe the nature and extent of Site contamination; evaluate associated potential risks (to human health, safety, and the environment); identify relevant cleanup requirements; and develop a range of cleanup alternatives for Site remediation. Potential cleanup alternatives presented in the EE/CA include construction of protective clean soil caps over the areas of contaminated soil, and excavation and removal of contaminated soils from the Site for disposal at licensed facilities. These cleanup alternatives were evaluated in the EE/CA based on numerous criteria, including protection of human health and the environment, compliance with applicable or relevant and appropriate government regulations, short- and long-term effectiveness, feasibility, and approximate estimated cost.

The EE/CA fulfills the CERCLA requirement of Section 300.415 (b)(4)(i) of the National Contingency Plan to evaluate the nature and extent of contamination at the Site and document selection of a recommended response action for a site where environmental contaminants present a potential risk to human health or ecological receptors, but where the removal action is non-time-critical.

The NPS has prepared a Draft Final EE/CA for the Mather Former Waste Disposal Site in Yosemite National Park. The Draft Final EE/CA includes a description of the nature and extent of contamination at the Site, an evaluation of potential risks to human health and the environment presented by the Site, a listing of relevant cleanup requirements, and a description of several potential cleanup alternatives that will address Site-related risks and comply with cleanup requirements. These alternatives were evaluated based on numerous criteria, with the outcome of this evaluation being the selection of a preferred cleanup alternative by NPS.