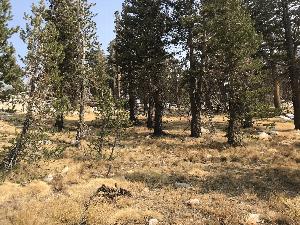 The Vogelsang Former Waste Disposal Area (FWDA) Site (the Site) is located in Yosemite National Park (the Park). The Site is being investigated under the Comprehensive Environmental Response, Compensation, and Liability Act (CERCLA) for potential cleanup of hazardous waste. Congress enacted CERCLA, also known as Superfund, in 1980 to address releases and threatened releases of hazardous substances into the environment. The Site is located within the eastern portion of the Park, approximately 100 feet southwest of the Vogelsang High Sierra Camp (HSC), one of the backcountry camping areas in the Park.

The Site was historically used as a waste disposal area for the Vogelsang HSC, with waste disposal activities reportedly occurring primarily between 1940 and 1965. Waste and debris found at the Site has consisted of crushed and rusted metal cans, metal household objects, broken glass, and broken china. Debris associated with the historical waste disposal activities has primarily been discovered in small discrete piles, extending to depths less than 4 feet below ground surface (bgs), distributed throughout the Site.

The historical waste disposal activities conducted have the potential to adversely impact the Site, as over time, the waste and debris breaks down, potentially releasing contaminants to the environment. In 2001, the National Park Service (NPS) entered into a consent agreement with California Department of Toxic Substances Control (DTSC) and agreed to determine the nature and extent of contamination at various sites throughout Yosemite National Park, including the Site. Under the agreement, NPS is exercising its CERCLA lead agency authority, and DTSC is exercising its RCRA corrective action authority.

In 2002, a Focused Site Inspection (FSI) Report was completed for the Site. The report investigated the lateral and vertical extent of the surficial and subsurface debris at the Site. Soil samples were collected from test pits advanced throughout the Site and immediate vicinity and found concentrations of potential contaminants greater than preliminary screening levels. The report recommended that additional investigation be conducted at the Site to better define the nature and extent of potential impacts to soil at the Site.

In 2019, an Expanded Site Inspection (ESI) Report was completed for the Site. In the report, additional investigation was performed at the Site to delineate the extent of impacts the soil. The 2019 ESI Report concluded that concentrations of metals, petroleum, dioxins, and PAHs were greater than preliminary screening levels and could pose a potential risk to human and ecological receptors.

Exposure risks to contaminates found in Site soils are considered low for humans and low for ecological receptors.

NPS has also prepared a Community Involvement Plan which serves as a guide for the NPS to engage and inform community members, environmental groups, government officials, the media, and other interested parties in the environmental investigation and cleanup activities at the Site.

The Draft Final Engineering Evaluation and Cost Analysis (EE/CA) for the Vogelsang Former Waste Disposal Site in Yosemite National Park is now available for public review and comment. The Draft Final EE/CA includes a description of the nature and extent of contamination at the Site, an evaluation of potential risks to human health and the environment presented by the Site, a listing of relevant cleanup requirements, and a description of several potential cleanup alternatives that will address Site-related risks and comply with cleanup requirements. These alternatives were evaluated based on numerous criteria, with the outcome of this evaluation being the selection of a preferred cleanup alternative by NPS. The public may review this Draft Final EE/CA and provide comments regarding its contents and findings over a thirty-day public comment period that will begin on September 20, 2021. The Draft Final EE/CA may be accessed and written comments may be submitted by clicking on the "Open for Comment" link in the left-hand toolbar of this page.