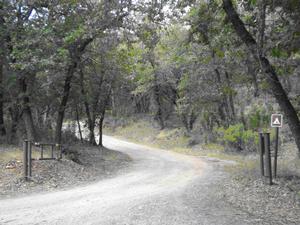 The National Park Service announces the completion of the National Environmental Protection Act (NEPA)- Environmental Assessment process with the approval and signing of the Finding of No Significant Impact (FONSI) for Managing Access to Enhance Security and Protect Park Resources at Whiskeytown National Recreation Area.

In order to reduce ease of access for individuals involved in illegal marijuana cultivation within the Park, to deter illegal dumping, to prevent resource damage from unauthorized off-road vehicle use, and to improve the visitor experience by removing non-natural features from the landscape, the National Park Service plans to install ten gates at nine locations to close administrative service roads and to block access to certain abandoned mining and logging roads.

In the fall of 2004, the park received two letters of concern regarding the installation of several gates on roads on the north side of State Highway 299. The park met with the concerned citizens at two meetings and explained that the gates had been installed to deter marijuana cultivation and prevent the dumping of hazardous waste, trash, landscape cuttings. All the roads gated in 2004 following the discovery of marijuana cultivation sites were utility access roads, constructed for the sole purpose to allow PG&E access to their transmission towers and poles.

This Environmental Assessment (EA) addresses additional proposed access changes on existing administrative roads. No roads currently used by the public for the purposes of recreational activity will be affected. The primary purpose of this project is to deter marijuana cultivation and illegal dumping. Restricting access to utility and administrative roads and blocking abandoned roads will assist the Park in achieving this goal.

This Environmental Assessment (EA) examined two alternative ways to manage park security and to fulfill the National Park Service mission to protect the physical and cultural resources of the park and make park resources available for the enjoyment of the public. Alternative B, the preferred alternative, calls for the installation of ten gates to restrict unauthorized vehicle access onto administrative roads, as well as, the installation of rock barriers to prevent access to overgrown and eroding abandoned logging and mining roads.