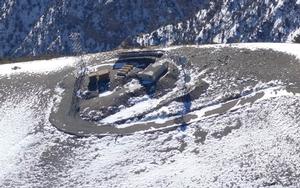 The summit of Rogers Peak is 9,980 feet, and is the only non-wilderness high point in the park. Rogers Peak is located between Telescope Peak and Mahogany Flat Campground in the Panamint Mountains.

Rogers Peak has been used as communications and instrumentation site by various government agencies since the late 1950s. There used to be a privately-owned analog signal cellular site. Existing infrastructure at the site consists of two telecommunication towers (up to 66 feet tall), three buildings, two large ground-mounted solar panel arrays, concrete pads, propane tanks, and an unpaved graded road. Several federal, state, and county agencies require rights-of-way permits for equipment that already exists on the mountain.

Death Valley National Park is in the R-2508 Complex, which includes all the airspace and associated land used and managed by Department of Defense (DoD) in the Upper Mojave Desert region. Military use of R-2508 includes bombing ranges, supersonic corridors, low-altitude, high-speed maneuvers, radar intercept areas, and refueling areas. Only some of these activities occur over Death Valley National Park. Added instrumentation at Rogers Peak would significantly improve safety and instrumentation coverage within the R-2508 complex.

Naval Air Weapons Station China Lake requests to establish a DoD instrumentation site on top of Rogers Peak. Equipment would include a 20-foot by 20-foot enclosed room and tower to support a telemetry antenna and dome (not to exceed 30 feet diameter) for a total height of up to 48 feet, two solar arrays capable of meeting 20kW in power requirements.
As part of this project, the DoD would install equipment for a microwave data link to Rogers Peak to transmit data to and from the antenna. The NPS proposes to install microwave radios linking Rogers Peak to Cow Creek. The microwave equipment on Rogers Peak would be mounted on the existing Air Force tower. The Cow Creek equipment could be installed on a 30-foot tall triangular lattice mast adjacent to the park curatorial building. There is an existing IT room inside the curatorial building that will serve as the demarcation point.

AT&T Mobility has applied to construct a wireless telecommunications facility on Rogers Peak. Equipment would include a 60 foot wireless tower, a 12-foot by 24-foot pre-fabricated equipment building with roof- top solar and enclosed generator, and an additional propane tank. The new shelter would replace the existing non-historic concrete pad that is currently unused at the site. All new equipment would be sited on previously disturbed, non-wilderness land.

The NPS is required by the Telecommunications Act of 1996 to consider all applications for the installation of cellular equipment on NPS lands. If approved, AT&T Mobility's telecommunications facility would increase cellular phone coverage in Death Valley and Panamint Valley. Most of Death Valley National Park does not currently have cell phone reception. Comnet operates two cell towers in the park, one on NPS land at Stovepipe Wells and the other on private property at Furnace Creek.

The United States Geological Survey (USGS) has applied for a right-of-way permit to add data communication equipment which would be colocated on and in existing structures.

The park encourages public participation throughout the planning process. There will be two opportunities to comment formally on the project—once during initial project scoping and again following release of the EA.