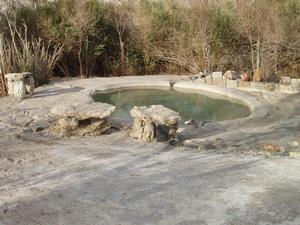 Saline Valley Warm Springs are located in a remote northwest corner of Death Valley National Park, 35 miles from the closest paved road. Recreational users developed soaking tubs and art installations starting in the 1950s. The site was managed by the Bureau of Land Management until it was transferred to NPS with the California Desert Protection Act in 1994.

The NPS started working on a management plan for the site in 2012. Inyo County, the BLM, and the Timbisha Shoshone Tribe participated in the plan as cooperating agencies. Several organizations were heavily involved in providing comments, including the Saline Preservation Association and Recreation Aviation Foundation.

There were opportunities for the public to provide feedback on the plan's direction in 2012, 2014, and 2018. The NPS received and analyzed a total of 1,696 pieces of correspondence during these comment periods. The NPS made changes to the plan at every stage of the process reflecting the feedback received from the public, organizations, and agencies.

"What we heard loud and clear from many of the recreational users was a desire to 'leave it like it is.' We feel this management plan will maintain a feeling of unconstrained recreation while protecting natural and cultural resources," said Death Valley National Park Superintendent Mike Reynolds.

Things staying the same under the plan:

• Existing soaking tubs at Lower Spring and Palm Spring would remain in use.
• Upper Spring would remain undeveloped.
• All art installations that were in place by January 1, 2019 in non-wilderness areas would be allowed to stay.
• Airplane use of the Chicken Strip, in use for decades, would be authorized by a separate (pending) special regulation.
• NPS would establish memorandums of understanding (MOUs) with user groups for maintenance and management of Saline Valley Warm Springs.
• Public nudity is common at the site, and the plan is silent on this topic. Public nudity is not against Federal regulations, but lewd behavior is.

Things that would change under this plan:
• Three camping zones would be established: 1) car camping areas; 2) walk-in camping with an associated parking area separate from the camping area; and 3) areas where camping is prohibited, including within 100 feet of source springs.
• Artistic fencing would be added around source springs to prevent access by nonnative burros.
• Existing mature palm trees will stay at Lower Spring and Palm Spring until they die of natural causes. No new palm trees would be allowed to grow and native plants will be added to provide shade.
• All nonnative plants, including palm trees, at Upper Spring would be removed.
• New artwork would be allowed only if it does not disturb natural or cultural resources, is of a temporary nature, and is removed by the visitor when he or she leaves.
• The vehicle support facility would be removed.
• The NPS would address concerns about water quality, storage of hazardous materials, and wastewater.


The plan became effective when the NPS signed the Record of Decision (ROD) on June 14, 2019. However, some aspects of the plan may not be implemented immediately.