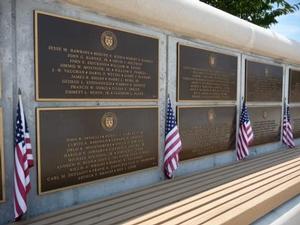 The National Park Service is pleased to announce the completion of the National D-Day Memorial Special Resource Study.

The National Defense Authorization Act for Fiscal Year 1997 (Public Law 104-201), designated a site in Bedford, Virginia as the location of the National D-Day Memorial in order "to honor the members of the Armed Forces of the United States who served in the invasion of Normandy, France, in June 1944." Dedicated on June 6, 2001, with ceremonies attended by President George W. Bush, the National D-Day Memorial encourages viewers to reflect upon the sacrifices made by troops during the amphibious assault on the Normandy beaches. A series of plazas lead approximately 80,000 visitors per year through various phases of the D-Day, from the early stages of planning through the victory of the Allied Forces.

The special resource study includes four chapters. Chapter 1 describes the purpose and background of the study, including the criteria used by the NPS to determine if a resource is eligible for potential designation as a unit of the national park system. The chapter concludes with a brief description of the study area. Chapter 2 provides a description of the design of the National D-Day Memorial, its associated resources, and current visitor experiences and opportunities. Chapter 3 provides the analysis to determine if the Memorial meets the various criteria for potential designation. Assessments of national significance, suitability, feasibility, and need for direct NPS management are presented. Chapter 4 describes the required consultation and coordination that occurred during the study, including a summary of public meetings and written communications.

Based on the analysis conducted during the study, the NPS concluded that the National D-Day Memorial did not meet the criteria for a new unit of the national park system. Recognizing these findings, the study did not investigate management alternatives and no additional environmental compliance was performed.

The special resource study can be viewed by clicking on the "Document List" tab on the left of this webpage. Thank you for your involvement in the National D-Day Memorial Special Resource Study.