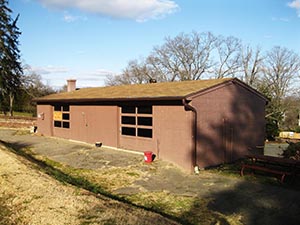 The Fredericksburg National Cemetery Garage and Maintenance Building was constructed in 1960 and replaced an earlier brick tool shed/stable building constructed in 1881. In the most recent update (2018) to the park's National Register documentation, the cemetery garage and maintenance building was determined to not be a contributing structure or resource. For many years, the building has not been used, except for the occasional storage of equipment overnight. All maintenance equipment for the cemetery is trucked in to the site daily, and returned in the afternoon, from the park's maintenance compound south of the city.

The garage is described in the National Register documentation as: "a large one-story, rectangular, cinderblock building oriented along a north-south axis about 25' north of the lodge, on the site of an earlier brick toolhouse. The shallow pitched side-gable roof is clad in asphalt shingles and has a metal-clad chimney at the north end of the west slope. The building has a poured concrete slab foundation with an asphalt apron along the facade (west) elevation. Two eight-panel wood vertical lift doors with rectangular glass panes in the upper six panels are symmetrically positioned at either end of the facade. A single vertical board door is centered in the wall between the two doors, which is covered with vertical board siding."

The park has decided to remove the garage and maintenance building. This will entail razing the structure. As the garage was built over the site of an 1881 toolshed/stable that served that cemetery, the park commits to following the advice of archaeological advisor and will provide archaeological monitoring of the removal of the 1960 structure and its concrete slab. The site will be rehabilitated by returning it to grass and turf and minor grading to ensure that surface drainage is kept away from the adjacent Lodge.