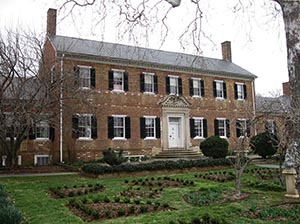 Fredericksburg and Spotsylvania NMP proposes to upgrade the HVAC system in four buildings at Chatham.

The buildings involved in the upgrade are the Chatham Manor (IDLCS #000422), Chatham Laundry (IDLCS #007874), Chatham Kitchen (IDLCS #007872) and the Chatham Carriage House and Stable (IDLCS #07877). The first three building were constructed 1768-1771 and comprise the original structures to the property. The Carriage House and Stable was built in the early 20th century. All four buildings currently serve as park offices, while the Manor also serves as a public use space with museum exhibits. All four building are contributing structures to the park's National Register eligibility.

The project involves making upgrades to existing HVAC systems located in Chatham Manor, Chatham Laundry, Chatham Library located in the Carriage House & Stables, Chatham Kitchen Building and the Fredericksburg Visitor Center. There will be little or no impacts to the buildings structure during the removal of existing equipment and placement of the new equipment. The improvements to current HVAC system will focus on dehumidification/humidification of office spaces and museum spaces, reducing system load, insulating the attic space, and eliminating humidity issues throughout the structures.