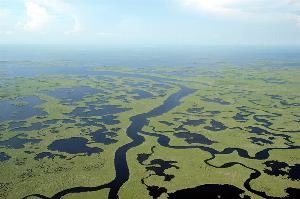 The National Park Service (NPS) and the Federal Aviation Administration (FAA) have initiated development of the proposed Air Tour Management Plan (ATMP) for Everglades National Park. The objective of this Plan is to develop acceptable and effective measures to mitigate or prevent the significant adverse impacts, if any, of commercial air tours on natural and cultural resources, visitor experiences and tribal lands.

The NPS and the FAA will host a virtual public meeting regarding the plan during the 30-day comment period on Thursday, August 19th at 6:30 PM ET. A link to join the virtual public meetings may be accessed under "Meeting Notices". You are invited to attend this meeting to share your thoughts and ask NPS and FAA representatives any questions you may have.

The proposed action is to implement an Air Tour Management Plan (ATMP) that would delineate acceptable levels of commercial air tours including, but not limited to, frequency, duration, altitude, and routes, consistent with the National Parks Air Tour Management Act of 2000 (Act). Congress developed the Act out of concern that noise from tour aircraft could harm national park resources and experiences for visitors.

One commercial air tour operator, Robert C. Gretzke DBA Wings Aero Tours, currently conducts commercial air tours at Everglades National Park. The operator holds Interim Operating Authority (IOA) for up to 674 flights at the Park each year. Based on the three-year average of reporting data from 2017 to 2019, Wings Aero Tours conducts an average of 64 commercial air tours at the Park each year. Wings Aero Tours conducts commercial air tours on eight different routes within the Park. The most frequently flown route is the Ten Thousand Islands Tour (TTIT), which starts and ends at the Everglades Airpark and provides visitors with backcountry views of the wilderness waterway within the Park. All routes are flown using a Cessna 206E fixed-wing aircraft, with altitudes between 500 feet and 1,000 feet above ground level (AGL). Altitude expressed in AGL units is a measurement of the distance between the ground surface and the aircraft. Commercial air tours are typically conducted between the hours of 9:00 AM and 5:00 PM and may occur any day of the week.

Under existing conditions, the annual number of commercial air tours at Everglades National Park is limited by the IOA; however, there are no designated parameters on route, time-of-day, or altitude restrictions to further protect Park resources or visitor experience. Currently, no procedures are in place that allow the Park to establish no-fly periods for special events or planned Park management. There are currently no training or education requirements for the commercial air tour operator flying over the Park. The provisions and conditions in the proposed ATMP address these parameters in a manner designed to protect Park resources and visitor experience from the effects of commercial air tours and support NPS management objectives for the Park.

Forty seven federally threatened/endangered species are present/have critical habitat in the project area. Wood stork (Mycteria americana) are under consideration as potentially being affected by the ATMP. The NPS and FAA have begun early coordination with the United States Fish and Wildlife Service (USFWS) and anticipates conducting informal consultation with a determination of may affect, not likely to adversely affect.