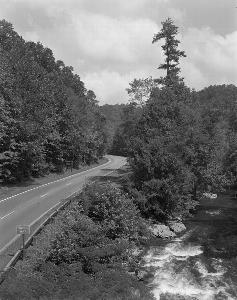 The National Park Service is proposing improvements on the Gatlinburg Spur (Spur). The Spur is part of the Foothills Parkway in Great Smoky Mountains National Park (Park) and comprises approximately 4.2 miles of four-lane divided urban parkway serving an annual daily average of 49,000 vehicles per day between Pigeon Forge and Gatlinburg in Sevier County, Tennessee. The purpose of the action is to improve level of service (LOS) in consideration of future traffic volumes along the Spur in a manner that retains the parkway character of the road. The proposed project is needed to address high traffic volume, delays, and LOS concerns identified in a recent traffic study.

The Spur runs primarily north-south, connecting the cities of Pigeon Forge and Gatlinburg, Tennessee. The West Prong Little Pigeon River (West Prong) runs between the northbound and southbound lanes, with bridges connecting intersections on either side. The Spur serves local communities, commuters, Park visitors, and Park staff. The roadway also connects to the Gatlinburg Bypass, providing an alternate route to the Park without going through downtown Gatlinburg. Park visitation has continued to grow in recent years, with the number of visitors increasing more than 30 percent from 2010 to 2019. Over the same timeframe, the population of Sevier County increased 9.3 percent to 98,250 people. Traffic volumes on the Spur are particularly high during daily peak commuting hours and throughout the Park's peak visitation season(s).

As part of the planning process, the Park is considering intersection improvements in three sub-areas (Gum Stand Road/King Branch Road, Husky Grove Road/Flat Branch Road, and Wiley Oakley Drive) based on findings of a traffic study completed in June 2019. The Park is also considering smaller-scale improvements at select locations along the Spur to address current or future needs.

We invite the public to comment on the Spur Improvements Environmental Assessment (EA) during the public review period May 6 through June 5, 2022. On the left column, click on "Open For Comment" to access the EA and provide comments.