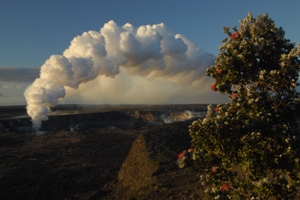 Over the past several years, many people have participated in the planning process through public meetings and formal comments received via mail, comment forms, and website forums. The National Park Service (NPS) released the Draft GMP/WS/EIS in May 2015 and the Abbreviated Final GMP/WS/EIS in March 2016. The approved plan is identified as the "selected action" in the ROD and as the "NPS preferred alternative" in the Final GMP/WS/EIS. The ROD includes a description of the selected action, synopses of other alternatives considered, the basis for the decision, a description of the environmentally preferable alternative, a summary description of measures designed to minimize environmental harm and an overview of public involvement in the decision-making process.

"Having a comprehensive plan to guide management decisions as we enter our next 100 years is an important step in protecting Hawai'i Volcanoes National Park for future generations," said Park Superintendent Cindy Orlando.

While work may start on some plan elements, Orlando said implementing the plan will not happen all at once. "It's likely to take many years, as funds and resources become available," she said.

This Record of Decision and the Draft and Abbreviated Final GMP/WS/EIS constitute the record of the environmental impact analysis and decision-making process for the General Management Plan and Wilderness Study for Hawai'i Volcanoes National Park.

Thank you again for your interest and participation in this important planning effort at Hawai'i Volcanoes National Park.