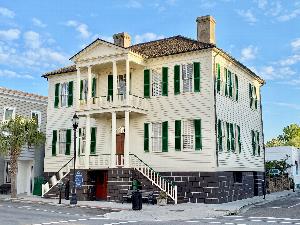 The National Park Service (NPS) is undertaking an integrity and condition study of the Beaufort National Historic Landmark (NHL) District. Designated by the Secretary of the Interior in 1973, the Beaufort NHL District is significant for its antebellum history and architecture as well as its role in the Civil War and Reconstruction. As a historic district, the Beaufort NHL derives its national significance not from one building or style but a collection of buildings, structures, and landscape features reflecting three centuries of history.

Having architecture different from that of Savannah and Charleston, Beaufort, the second oldest town in the state, has preserved a number of distinctive "low-country" houses from the 18th and early 19th centuries. Typical houses have two-story verandas, and airy, open interiors. Several buildings, foundations, and other character-defining elements of the district are built of tabby, an important regional building material composed of oyster shells, lime, and sand mixed with seawater.

The National Park Service monitors the condition of National Historic Landmarks to ensure that they continue to possess the historic qualities for which they were designated. As a part of the monitoring process, the NPS is commissioning a study from LG2 Environmental Solutions, Inc. that will document, in narrative and graphic formats, major changes that occurred within and adjacent to the district since its designation in 1973. The effort involves research, a field survey, photographic documentation, Geographic Information Systems analysis, and public engagement. The assessment will also examine current and future projects and trends that may affect the integrity of the Beaufort NHL District. The NPS hopes that the information contained in this study will aid in the stewardship of the NHL by providing policy makers and the public with a better understanding of the District.