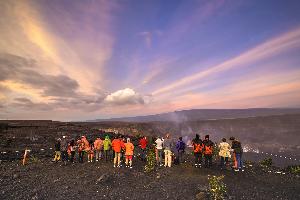 The Federal Aviation Administration (FAA) and the National Park Service (NPS) invite public and stakeholder input on the potential alternatives for the Hawai'i Volcanoes National Park Air Tour Management Plan (ATMP) Environmental Assessment (EA). Comments are being accepted as part of a National Environmental Policy Act (NEPA) public scoping process and must be received by April 1, 2022 at 8:00 PM HST. Comments may be submitted starting February 28, 2022, by clicking on the "Open for Comment" link on the left side of this page.

Consistent with the National Parks Air Tour Management Act of 2000 (Act), as applied to Hawai'i Volcanoes National Park, commercial air tour operations are defined as any flight conducted for compensation or hire in a powered aircraft, where a purpose of the flight is sightseeing over the Park, within ½-mile outside the boundary of the Park during which the aircraft flies below 5,000 feet above ground level.

Commercial air tour operations over Hawai'i Volcanoes National Park have been ongoing since before the Act was enacted in 2000. The Act directed the FAA to grant Interim Operating Authority (IOA) to operators that were already conducting tours at the Park when the Act became effective until such time as an ATMP is developed. An operator's IOA is based on the number of commercial air tour operations the operator reported it was conducting over Hawai'i Volcanoes National Park prior to the time the Act was passed. IOA does not set routes or operating conditions for an operator except to limit the number of air tours the operator is permitted to fly each year. Ten commercial air tour operators currently hold IOA to fly up to a combined total of 26,664 commercial air tours over the Park every year. Implementation of an ATMP will replace IOA.

The FAA and the NPS have put forth four potential ATMP alternatives for public and stakeholder input. Each alternative describes conditions for the conduct of air tour operations over the Park, including routes, altitudes, time-of-day restrictions, restrictions for particular events, maximum numbers of flights, or other provisions. In developing these potential alternatives NPS has considered several environmental factors such as the Park's natural and cultural resources, wilderness character, visitor experience, and Native Hawaiian Traditional Cultural Properties including Native Hawaiian community input, sacred sites, and ceremonial areas.

More information about the existing commercial air tour operations and the potential alternatives can be found in the project newsletter, linked on the left side of this page under "Document List".

Public and stakeholder input will be used to refine or dismiss alternatives and potentially consider new alternatives. Public input will also be used to inform the environmental analysis. The draft ATMP and alternatives that are carried forward and analyzed in the EA will be made available for public review and comment as part of the process. The agencies will hold a public meeting as part of the draft ATMP and EA public review process. The public will be notified of this opportunity via news release, Federal Register Notice, and on both agencies' websites.