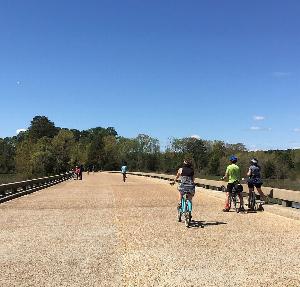 It is proposed to implement a recurring, temporary closure of the Colonial Parkway to motor vehicles between Route 199 Kingspoint in Williamsburg to Route 359 near the entrance to Jamestown Island. The purpose of the recurring closures is to offer temporary recreational opportunities to experience the Parkway free from motor vehicle traffic.

Previously the NPS has implemented a short closure once a year for a Special Use Permit issued to BikeWalk Williamsburg for the Pedal the Parkway event. Pedal the Parkway occurred annually from 7:00 am-1:00 pm on the first Saturday in May. The closure allowed for bicyclists, runners, and walkers to recreate on the Colonial Parkway without sharing the roadway with motor vehicles. The 6-hour long annual event typically attracts around 1,200 participants who may not have otherwise used the parkway for cycling or running/walking because of the normal vehicle traffic.

BikeWalk Williamsburg cancelled their 2020 Pedal the Parkway due to COVID19. However, Colonial NHP closed this same section of the Parkway for approximately three months in Spring 2020 to prevent visitors from accumulating in large groups at the beaches. The closure allowed visitors and community members access to bicycle, run, and walk without motor vehicle traffic. The closure prevented large crowds from going to the beach but also facilitated wellness, physical activity, and recreation on the roadway. The Park observed increased bicycle and pedestrian activity on this section of the parkway during the 2020 closure.

In response to an increased public interest in this type of recreation in the park it is proposed that the NPS implement a recurring closure of the Colonial Parkway between Route 199 Kingspoint and Route 359 at Jamestown. The proposed closure could be for various durations at various times each year.

Proposed examples could include:

The Park is seeking public input for consideration on the proposal in general and for specifics about timing and frequency.