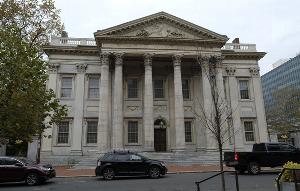 Rehabilitate the First Bank of The United States

The National Park Service (NPS) is proposing to rehabilitate the First Bank of the United States located on 3rd Street between Walnut and Chestnut Streets in Philadelphia, PA. The First Bank is individually listed on the National Register of Historic Places and is also listed as a National Historic Landmark located within Independence National Historical Park Historic District. The First Bank of the United States is noted both for its distinguished architecture and historical significance. Due to missing, antiquated and/or failing HVAC, accessibility, and life safety systems, as well as the building's overall poor condition, the First Bank of the United States was closed to routine public visitation in 2002 and since that time has been underutilized. The purpose of this project is to rehabilitate the building to return it to a viable use and reopen this important structure to the public. As proposed the rehabilitated building will house a new exhibit on the financial system and the economy of the early Federal period and part of the park's architectural study collection.

NPS explored alternatives to address the code deficiencies. In consultation with PA State Historic Preservation Office (SHPO) and the National Historic Landmark (NHL) program, NPS concluded that the construction of an addition on the west façade was the best alternative. The addition will house a code compliant egress stair, an accessible entrance, elevator, and accessible restrooms for the building.

The project is being completed in partnership with Independence Historical Trust (INHT). The Park entered into a Partner Design and Construction Agreement on May 7, 2019, with Independence Historical Trust (INHT), whereby INHT would procure and facilitate the design and construction services needed to rehabilitate the First Bank.

Pursuant to 36 CFR Part 800, the regulations implementing Section 106 of the National Historic Preservation Act (54 U.S.C. § 306108), the NPS will enter into a Memorandum of Agreement with the PA SHPO, the Delaware Nation, and the Shawnee Tribe, to mitigate the adverse effect. The Park is making the draft Memorandum of Agreement (MOA) available for a public review and comment period.

The comment period is from February 25 through March 11, 2022. From the Project Links list, select "Open For Comment" to submit your feedback. You may also mail comments to the park. Please address comments to: