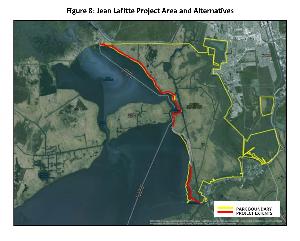 The Department of the Interior is a designated natural resource trustee agency authorized by the Oil Pollution Act of 1990 (OPA) and other applicable federal laws to assess and assert a natural resource damages claim for the oil spill that resulted from explosion from Deepwater Horizon on or about April 20, 2010. This process is known as a Natural Resource Damage Assessment and Restoration (NRDAR). DOI is only one of several Trustees, including agencies of the State of Louisiana. Consistent with the OPA, the Trustees have initiated restoration planning to identify the actions that will contribute to restoring injured natural resources and to make the public whole for the injuries and losses that occurred.

The Department of the Interior (DOI), acting through the U.S. Fish and Wildlife Service, the National Park Service (NPS), and the Bureau of Land Management, developed a restoration plan for restoring submerged aquatic vegetation within the Barataria Preserve unit of Jean Lafitte National Historical Park and Preserve. The project area is located 15 miles south of New Orleans in Jefferson Parrish, Louisiana along the shores of the preserve.

The project will build living shorelines consisting of a nearly continuous rock breakwater, with rock elbows protecting fish gaps along the eastern shorelines of Lake Cataouatche, Lake Salvador, and Bayou Bardeaux in the preserve in Jefferson Parish, Louisiana. The northern portion of the rock breakwater would extend from Bayou Verret to tie into an existing riprap shoreline protection project at Lake Salvador near Couba Island with canal openings and pipeline right-of-way access where needed. The southern portion of the proposed rock breakwater would tie into the southernmost end of the preexisting riprap shoreline protection and extend to the area near Isle Bonne with pipeline right-of-way access where needed. The preserve is positioned along Bayou des Familles-Bayou Barataria, which are remnant waterways formed by a former distributary of the Mississippi River along with the rest of the preserve landscape. The land is actively subsiding because the current delta sits above thousands of feet of unconsolidated sediments deposited during previous delta-building episodes.