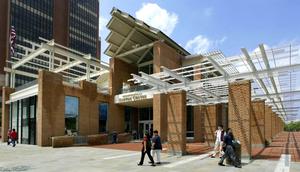 The National Park Service (NPS) in partnership with the Independence Visitor Center Corporation is planning a phased campaign of exterior and interior changes to the Independence Visitor Center (IVC) located on the northwest corner of Sixth and Market Streets, Philadelphia, Pennsylvania. The IVC is jointly operated visitor center located in Independence National Historical Park that provides visitors to the park and the Philadelphia region with information and services designed to enhance their visit.

Since this regional visitor center opened in 2002 average yearly park visitation has increased by more than 600,000, or nearly 25%. ear alone, Independence National Historical Parks visitation is 30% higher than previous year. The IVC is one of the primary destinations in the park and over 2 million visitors use its amenities annually.

Philadelphia's success as a tour destination has prompted us to expand the Independence Visitor Center. The first phase of the improvement project will add a restroom addition, coat room, basement expansion, catering bridge and terrace to the east side of the building. The existing restroom area will become additional space for the gift shop. The addition will add 1,850 square feet to the present building.

The additions architects, Saylor Gregg, a studio of Jacobs Wyper, have used the guidance of the 1998 Independence Mall Design Guidelines that we created during the three block malls redevelopment. Working with the Mall Master Plan, the Guidelines are intended to direct the future development of the landscape and the architecture on Independence Mall. The eastern edge of the addition will not intrude on the existing vista, carefully preserving the clear view of Independence Hall from the National Constitution Center. The new addition will be within the line of the trellises that maintain the arborway along the eastern edge of the building. While the restroom addition requires infilling windows, the new terrace on the mezzanine level will help mitigate that loss. The plans also include new plant materials along the eastern edge of the addition.

As the excavation for the basement will involve ground disturbance in a heretofore uninvestigated area, we will employ an archeological team whose credentials meet the Secretary of the Interiors Standards and Guidelines for Archeology and Historic Preservation. The team will conduct exploratory excavations on the site and will recover and document any significant archeological resources that are encountered.

All additional phases of the project are within the buildings interior spaces. For purposes of this review, we are focusing on exterior changes only.

The public is invited to review the proposed exterior changes and to comment on the project. Concept drawings for the addition can be viewed by following the link titled 'Document List' at the left of this page. You may enter your comments on this document until 11:59 pm Eastern Time on February 15, 2016 by following the 'Open For Comment' link at the left of this page.