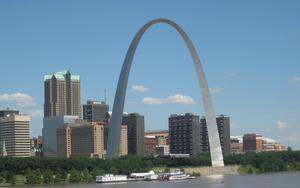 Alternatives for Revitalization of the Memorial

In the summer of 2011, the NPS published a Notice of Intent in the Federal Register and circulated a newsletter asking for public feedback on the scope of the Environmental Assessment (EA) to evaluate proposed changes to Jefferson National Expansion Memorial (the park) for improving visitor access and experience, while better integrating the park into downtown St. Louis. The NPS has also been engaged in a separate but concurrent process to meet compliance requirements for section 106 of the National Historic Preservation Act, as amended.

In the fall of 2011, we analyzed the public comments received on the scope of the EA, and shared them on this website (click on 'Document List' to the left, and then click on 'Public Scoping Comments' to view the comments). With these comments in hand, and the results of numerous meetings with the design team and other stakeholders, the NPS then held an alternatives development workshop. During this workshop we looked at the individual, site-specific projects proposed for the Arch grounds to identify how they might fit together to create reasonable, park-wide alternatives for meeting the project's purpose, need, and objectives. Once the alternatives were refined and described, the NPS analyzed their environmental, cultural, and social impacts and compiled the EA, with input from our cooperating agencies (Missouri Department of Transportation, Federal Highways Administration) and the Great Rivers Greenway District.

On January 15, 2013, the NPS published the EA for Implementing CityArchRiver Initiative Elements, and issued a press release to announce the availability of the document and the public meeting to be held at the Old Courthouse in St. Louis on January 29, 2013. Postcards and emails announcing the availability of the EA on this site and the public meeting were mailed to the project's mailing list of government agencies, tribes, organizations, businesses, and individuals. A hard copy of the EA was available for review at the park, or by request from the Superintendent.

Public comments were accepted through March 1, 2013. Once the comment period closed, the NPS analyzed the comments, developed responses and minor text changes to the EA, and prepared a finding of no significant impact (FONSI). The FONSI, which can be accessed by clicking on the 'Document List' link to the left was signed by the Regional Director of the Midwest Regional Office on May 3, 2013, completing the National Environmental Policy Act Process.

The approval of the FONSI concludes the National Environmental Policy Act process and represents a major milestone in the effort to revitalize Jefferson National Expansion Memorial. From here, other internal and external design review processes must be completed, and funding secured for construction, operations, and maintenance, prior to implementation of the selected alternative. As these processes unfold, the NPS will make additional updates available via the park's website at http://nps.gov/jeff.

Also, please check this site and the park homepage at www.nps.gov/jeff for updates on the project, including the compliance processes.