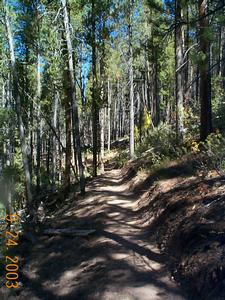 To safely accommodate bicycles, and for the sustainability of the trail, a 1/4 mile section of the trail required rerouting. Per the NPS Bicycle Rule (36 CFR4.30), and based upon a review by the Office of the Regional Solicitor, the 1/4 mile reroute was considered a "new trail," and rulemaking was required before the reroute could be constructed and the trail designated for bicycle use. The proposed rule was published in the Federal Register on December 1, 2015.

After extensive public involvement, a decision document was signed that approved bicycle use on this two-mile section of the trail inside the park. This decision was documented with the publication of a final rule in the Federal Register on March 2, 2018 and becomes effective on April 2, 2018.

The rule can be found at www.regulations.gov. Search for the regulation identifier number "1024-AE31."

Trail proponents, including the Headwaters Trails Alliance, will be responsible for completing work on the trail before it opens to public bicycle use. The timeline is still being negotiated.