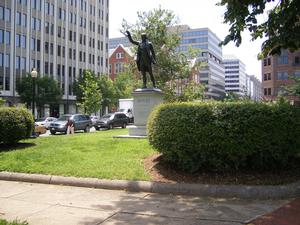 The National Park Service (NPS) proposes to rehabilitate U.S. Reservation 68, which is managed by the National Mall and Memorial Parks, a unit of NPS. This triangular park is located between 11th and 12th Streets, NW, on L Street NW and Massachussetts Avenue, NW. The purpose of the project is to improve existing conditions and maintain the historic character of the L'Enfant era reservation.

This project is an effort to reflect earlier planting arrangements from the 1920s and 1940s but not necessarily restoring it to specific plan. Original design principles include the symmetrical backdrop behind the Edmund Burke statue, restoring street buffers along the boundary of the park, and a plant palette that reflects the historic designs, with an updated selection of hardier plant material that can withstand current growing conditions. No changes will be made to the existing hardscape features of the park.

This rehabilitation proposal has been developed in consultation with the DC Office of Planning. The work is expected to be completed in 2012. A five-year maintenance agreement with the DC Business Improvement District (BID) will be implemented for this project.

The NPS held a public comment period regarding planning efforts and potential impacts to historic resources or visitor use for the proposed project from March 1-15, 2012. No comments were submitted.